Kaylynn Pleasant (née Langerak) is a well known resident in my player stories in The Sims 2 in Pleasantview who previously worked as a Maid. She is the daughter of the late Dustin and Iliana Langerak (née Mae), the younger sister of Parker Langerak, the niece of the late Zelda Mae, the ex-girlfriend of Don Lothario, the wife of Daniel Pleasant, the adoptive mother of Angela and Lilith Pleasant and the mother of Clovis, Sarah and Arian Pleasant.

In The Sims 3, Kaylynn was a Child residing in Sunset Valley with 3 days from becoming a Teen - making her 4 days older than Mortimer Goth and Bella Bachelor. By the time of The Sims 2 Kaylynn is an Adult residing in Pleasantview as one of the three NPC Maids. Like Bella, Kaylynn is 33 days younger than Mortimer, even though she was older than him in the Sims 3. It is presumed that Kaylynn had access to Elixir of Life at some point in her life. I personally believe that she could have used a Sim Modder and/or had Life Fruit in addition to Elixir of Life. I have modified Kaylynn's data so that she is officially 4 days older than Bella and Mortimer, while she and Bella are still Adults. Kaylynn is voiced by Gerri Lawlor.

It came as a surprise that Kaylynn showed up when playing the Pleasant family for the first time. I had seen her in Don's Relationship panel, but this was the first time I'd actually seen her in person. Before the Maid arrived, I was unaware of her relationship with the married Daniel Pleasant. When I first noted that Daniel's romantic affair with Kaylynn was closer than his relationship with Mary-Sue, I decided to let him continue the Affair. I could have easily prevented Mary-Sue from finding out about the affair but I - accidentally on purpose - let her catch him and Kaylynn in the act anyway. I did consider making Daniel end his affair with his maid so that he could repair his relationship with Mary-Sue. But then I thought that Mary-Sue probably wouldn't want to be married to Daniel anymore. So I had Mary-Sue break up with Daniel, leaving him to marry Kaylynn.

Over the months (and now years) of playing the Sims 2, Kaylynn has made friends with several other residents in Pleasantview. These new friends include Mortimer and Bella Goth and Nina Caliente. Daniel, Mary-Sue and Kaylynn eventually set aside their old differences and the three of them and Angela and Lilith are now good friends.

Kaylynn doesn't seem to have commitment issues in my player stories like she did at the start of the game, partly due to breaking up her love with Don. Apparently Don still has romantic feelings for Kaylynn, but these feelings are not mutual. Kaylynn is now employed in the Culinary career starting as an Executive Chef. She has worked her way to becoming a Celebrity Chef. Kaylynn seems much less shy and more confident than before. Also her appearance has gone through a significant change from her default maid outfit and dyed black hair, to blonde hair, a black variation of Bella's top and white baggy trousers similar to the pink cargo ones that her best friend Nina wears. 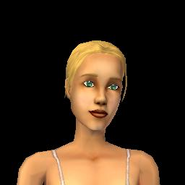 Kaylynn's daughter Sarah.
Add an image to this gallery

Retrieved from "https://sims.fandom.com/wiki/Fanon:Kaylynn_Pleasant_(Langerak)?oldid=941313"
Community content is available under CC-BY-SA unless otherwise noted.