Kole "Kay" White was the husband of Gerda White, as well as the father of Snow and Ozama. He was also the brother of Layton "Layt" White and ex-husband of Talia White, now his sister-in-law.

Kay and his brother Layt spend a lot of time hanging out at Varg's Tavern, which is where Kay becomes acquainted with Talia. Talia and Kay eventually enter a steady relationship, before becoming engaged and later getting married. Some time later, Kay learns from Talia that they are expecting a baby together, which overjoys the family-oriented Kay. Talia eventually gives birth to a baby girl, Snow. With a wife and a child, Kay enters a career in politics, although he is late on his first day after he gets carried away and WooHoos his wife. At work, Kay reunites with his old friend Prince Charming. Kay has Prince stay over, and they throw a party together. However, Kay learns that Talia is cheating on him with Layt, and they get divorced. Some time later, Kay meets and enters a relationship with Rachel Muffet, until Kay's maid Gerda gets jealous and contacts "The Huntsman" to separate the two. "The Huntsman" has a potion slipped into Kay's drink, causing him to become incredibly angry and subsequently break up with Rachel, scaring her away. Using this chance to seduce Kay, Gerda eventually marries him and they a daughter together. However, Baba Yaga curses Snow, causing her to kill Kay. Gerda is horrified and vows to avenge Kay. She also buys a magic mirror so she can contact Kay's spirit. 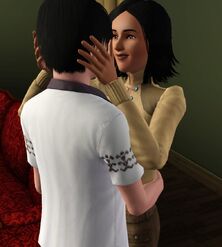 Kay is seduced by Gerda. 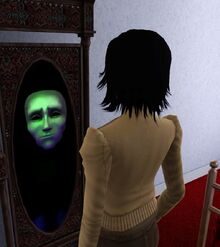 Kay's soul in the magic mirror.
Add an image to this gallery

Retrieved from "https://sims.fandom.com/wiki/Fanon:Kay_White?oldid=783266"
Community content is available under CC-BY-SA unless otherwise noted.