Justine Starr Schwarz was the illegitimate child of Robyn Schwarz and David Starr. She resided in Riverview (although she's from Sunset Valley) with her husband, Duane. She was best friends forever with Kirsten Straight. She has one child from her first marriage, Starr.

Not much about Justine's early life is known other than the fact that the identity of her biological father was unknown. She thought it was her mother's longtime(at the time) boyfriend, Nelson Harvey. However, Nelson took a paternity test after discovering that Robyn had an affair and found that he was in fact, not the father. He proceeded to break off the 8-year relationship and left. Justine was left in the care of a single mother, who's only means of supporting the two was through her penchant for crime. As Robyn became more and more involved in crime and obsessed with looking for male companionship, she began to neglect Justine. This caused Justine to harbor resentment towards her mother.

Justine was a bit of an outsider at school. One day while playing in the park, she met a girl named Kirsten Straight. The two quickly forged a lifelong friendship and she gave Justine someone to turn to in times of need.

While Justine was not studious pupil, she still enjoyed going to school (at least she wasn't home). With Kirsten, school wasn't so unbearable; at least she had a friend.

For a little while, Justine's mother had been dating a guy named Seth. Unlike some of the past men her mom has dated, he was actually a good father figure. However, Justine's family packed up and moved to Riverview after Seth's job transferred him there. To Justine's excitement, Kirsten was also moving to Riverview since her half-sister's girlfriend was transferred to Riverview.

Shortly after moving, her mom and Seth were engaged. The wedding was held after a year long engagement. However, Justine's home life didn't greatly improve, as her new stepfather was more focused on his career.

As a teen, Justine became more and more independent of her mother and didn't get along with her well. Her mother was focused more on her criminal career and relationships, leaving Justine to fade into the background. However, she still had a rock solid friendship with Kirsten, and both girls found a new friend in Bex. Justine's mother and stepfather divorced when she was 16, but Justine still kept in touch with him.

Justine still didn't take school that seriously, but enjoyed it because she was able to get away from home. However, she quickly gained a reputation for being promiscuous and dressing in skimpy attire.

She worked at the day spa as an intake specialist.

Justine was dating her first boyfriend, Bob Newbie, for only a few months before she cheated on him with Dallas Shallow. She and Dallas had an instant connection and started dating almost right away. However, she and Dallas disagreed on a lot of things and argued often. They broke up, but Dallas manipulated her into getting back together with him. Their relationship wasn't any better and Justine finally broke things off for good.

One day in Simlish class, she met her future husband, Mike. Like with Dallas, they had an instant connection. The two began dating. Justine felt truly in love for the first time.

Right out of high school, Mike thought they should get married. She agreed on the condition that she and any of their children would have her last name. They eloped at city hall moved into a small 1 bedroom mobile home, as neither of them had a lot of money. Justine got a job as a coffee courier at Doo Peas Corporate Towers.

A few months after the elopement, Justine unexpectedly discovered that she was pregnant. She was very nervous but Mike reassured her that everything would be alright. Kirsten told her she and Sally be happy to help care for the baby in any way she could since they felt they were ready to start a family of their own.

Justine went into labor at 10 PM on a Saturday. At 1 AM on a Sunday morning, Justine gave birth to a beautiful baby girl. She named her Starr Jolene Schwarz, after Justine.

When Starr turned 2, Justine and Mike moved into a two-bedroom house. However, Justine began to grow suspicious of Mike. She soon found out he was having an affair with his friend Susie Broke. She immediately filed for divorce and turned to the a couple of the few people she could count on: June Straight and Janet Michaels. Kirsten and Sally were also busy with a baby, and didn't have enough room in their house for her. But June and Janet gladly took them in, as she was like family to them. Around this time, Justine started seeing a man named Fred Lee.

One day, Justine went to Robyn and Cale's for a visit. Her mother invited her in for a cup of coffee. She said she reconnected with the only other man who could've been Justine's father. It's revealed that he was a man named David Starr, hence Justine's middle name. Shortly after his fling with Robyn, David married a woman named Bessie and had three more daughters. He settled down in Monte Vista.

Justine flew out to Monte Vista with Starr to meet him. She discovered that he led quite an idyllic family life, as he and Bessie were still happily married, he and his daughters all got along really well, and they resided in a small mansion, as they were wealthy. It was a bit of a shock to David, but he welcomed Justine to the family without hesitation. After a nice night of dinner and board games at their house, her father and step-mother said she and Starr were welcome to visit anytime.

After a few months, Justine and Fred split-up, following her election as a councilwoman. A month later, a repairman by the name of Duane Perry was called to the house to fix the TV. He and Justine developed an instant attraction to one another, and went on a date a short time later. Not long after, they became official.

Starr had moved out and married Tristan, and everyone was happy for them. By this time, however, Justine's mother had passed away from old age. A year after, Duane proposed to Justine, who accepted. The couple held their wedding at "All the Rave" Warehouse. At this wedding, there was a revelation: Starr was pregnant!

Despite the loss of her best friend, Justine pushed forward. She died 5 years afterwards from natural causes. She was survived by her husband Duane, sisters Edith, Trudy, and Eunice, daughter Starr, son-in-law Tristan, and granddaughter Dawn. She was predeceased by her parents Robyn and David.

Justine chatting with her sisters, Trudy and Eunice

Justine and Kirsten sitting together on the school bus 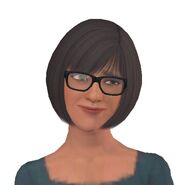 Justine and Duane's wedding
Add an image to this gallery

Retrieved from "https://sims.fandom.com/wiki/Fanon:Justine_Schwarz?oldid=855707"
Community content is available under CC-BY-SA unless otherwise noted.