Julissa Rosa (née Martinez) is a Sim created by JennaLorena (talk). She is the daughter of Montana Martinez and Octavio Martinez, and the sister of Sheena Cane, Christofo Martinez, Joshua Martinez, and Olga Martinez. She is also the husband of Aaron Rosa, and the mother of Alonda Jones and Caridad Ionello. She is also the grandmother of Carolina Pola, Elise Whelan, Cordelia Ionello, and Zachary Ionello, as well as the great-grandmother of Jason Whelan and twins Percy and Mariah Ionello.

Life Leading Up to The Sims 3Edit

Julissa's only live and playable appearance is in The Sims 3. She starts off living with her husband, and eldest daughter. Her other daughter has already moved out and started her career. She has long, grey hair, big brown eyes, and wears a classy, red dress coated in white, with a beautiful, expensive necklace.

Unlike her husband, Julissa's childhood was a very dysfunctional and complicated few decades. Although having a close, loving relationship with all members of her family, the chaos began with the fiery deaths of her brother Joshua and sister Olga. That incident put the family in a downward spiral, leaving Julissa's father, Octavio in a state of depression. During these years, her mother took over the responsibilities of the house, financially and emotionally supporting the family. Things only got worse when Octavio finally committed suicide. It took years until the family got back into a sense of normalcy, and it was at that point when everyone started moving on with their own lives.

The eldest of the five siblings, Julissa was the first to get married. In the early stages of marriage, Julissa and Aaron were indefinitely happy, having a stable financial life, and two beautiful daughters. But during the childhoods of Alonda and Caridad, Aaron was caught cheating with the late Tatiana Angelista. Although heartbroken, Julissa and Aaron sufficiently kept the relationship a secret, and their relationship grew heavily over the next few years. However, Aaron's willingness to attend Tatiana's funeral drew a larger wedge between the two. But by the time the game begins, they're are back into a happy state and rebuilt their relationship.

Like her husband, outside her family, Julissa has little friends around Bridgeport. She is, however, remarkably close with Alan Stanley and Emmy Starr.

Contrary to her sister Sheena, Julissa isn't quite sure that Daria is just marrying Christofo for his money. She is good friends with the woman, and does find her to be a charismatic and charming person.

Life Leading Up to The SimsEdit

Although most likely alive during The Sims, Julissa does not appear. Her daughter, Caridad does, however, now with a husband and daughter.

Life Leading Up to The Sims 2Edit

By the time the storyline has caught up in The Sims 2, Julissa and Aaron are already deceased. It appears they have been deceased for quite some time, since Alonda has already died of old age, and Caridad is in the late stages of elderhood. Although not alive, her legacy surely is, since her family and grown through several generations.

Julissa with her husband and daughters.

Julissa and Aaron are happy as ever.

Julissa conversing with her brother Christofo and sister Sheena. 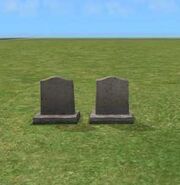 Julissa spending eternity next to Aaron.
Add an image to this gallery
Retrieved from "https://sims.fandom.com/wiki/Fanon:Julissa_Rosa?oldid=572127"
Community content is available under CC-BY-SA unless otherwise noted.