Julien Cooke is a resident of Desiderata Valley, the husband of Natasha Cooke (nee Una), and the father of Rosemary Cooke.

Julien once created a secret, award-winning recipe, but it was stolen by his rival, Zebest Quizine, who rose to fame because of it. After this, he decided to move to Desiderata Valley to get a new start. When he moved into his home, he was welcomed by a few local Sims in a Welcome wagon. One of those Sims was Natasha Una, who Julien struck up a conversation with. The two ended up getting along very well - thanks to their mutual love of Grilled Cheese - and eventually went on a date and started a romantic relationship.

Soon they decided to move into Natasha's house together. A few days later, Natasha found out she was pregnant, and Julien proposed. Once baby Rosemary was born, the two got married. Julien is very close to his daughter, having taught her the Toddler skills. 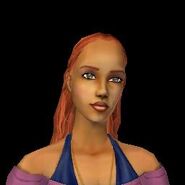 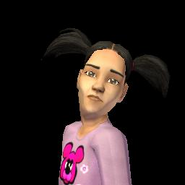 Julien's daughter, Rosemary.
Add an image to this gallery
Retrieved from "https://sims.fandom.com/wiki/Fanon:Julien_Cooke_(imageneralwheee)?oldid=778923"
Community content is available under CC-BY-SA unless otherwise noted.