Jordan Ionello is a Sim created by JennaLorena (talk). He appears only in The Sims 2. He is the son of Isaac and Stephanie Ionello, the husband of Geena Ionello, and father of Jada Ionello.

Life Leading Up to The Sims 3 Edit

Since his parents are only teenagers in The Sims 3, neither Jordan or his wife are alive.

Life Leading Up to The Sims Edit

Neither Jordan or any members of his immediate family exist in The Sims.

Life Leading Up to The Sim 2 Edit

Jordan's first and only appearance is in The Sims 2. He is introduced with his wife, with whom he has a daughter, Jada. He is the son of Isaac and Stephanie Ionello, and has close relations to the rest of the Ionello family. Although sharing the common Ionello traits, he has green eyes, which he gets from his mother. His father, by the time the storyline has caught up, has drowned before the beginning of the game.

Jordan and his wife's life was envied by the rest of the town, with both having profitable careers and a beautiful child. It stunned the rest of Pleasantview when it was revealed that social services had taken away their daughter Jada. Although the rest of Pleasantview, even the Ionello family, believes it was the parents insufficient care that lead to the removal of the child, Jordan and Geena are convinced it was the work of Lilith Pleasant, who recently got into several fights with Geena and Jordan.

Jordan is also a good friend of John Burb. 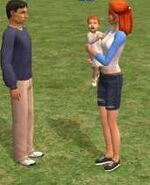 Jordan with Geena and Jada.
Add an image to this gallery
Retrieved from "https://sims.fandom.com/wiki/Fanon:Jordan_Ionello?oldid=673771"
Community content is available under CC-BY-SA unless otherwise noted.