John Space is the youngest child of Quinn and Jacob. Jr Experiment and the younger brother of Suki and Lana Space. Despite his age, he knows a lot for a little boy.

Before he was born, John's parents began dating after Jacob. Jr's mother died. Although people were sure that young love wouldn't last, they proved them all wrong by staying together and eventually got engaged. However, they had a shock when Quinn found out that she was pregnant! She soon had Lana and remarkably things were Ok. They graduated with honours and all seemed Ok. The soon bought a house for the family and Quinn found out that she was pregnant again. Suki was born and everything was fine. Then Quinn became pregnant again, John was born.

As a baby, John had a relatively normal babyhood. His sisters adored him, his parents loved him and life was pretty ordinary. He liked life and enjoyed the attention.

As a toddler, John's life was still quite idyllic. he was taught all his skills and his sister, Suki taught him a nursery rhyme which he sung so much that Suki soon regretted teaching him. He aged up happy.

As a child, John's life took a turn for the worse. His sister Lana had been distant for a while but one night he heard talking on the phone about moving away. He was a little surprised but assumed she meant college. He soon found out she didn't when one night, Lana left home. John wasn't asleep and he heard Lana arguing with somebody and then driving off. Later the next day he found out it was Suki. Suki was now dead. John was upset and ran up to his room to be alone. He heard some people arriving, weird sounds in the basement and next thing he knew his parents were telling him Suki was back but he couldn't tell anybody. John noticed Suki was angry all the time but one day he noticed a change in her. lowly she seemed to be getting better. She would even play with him from time to time. He almost thought it was too good to be true which he later found out was right. When his parents let Suki watch him while they slept, John noticed something change in her. She told him just to play while she cleaned up but he never heard her leave the room and he soon felt her hands pulling his arms behind his back and tying him up. He told her that he would tell Quinn and Jacob. Jr but she just laughed and pushed him down the cellar. John was luckily not hurt badly which was lucky considering the cellar had a hard floor and locked from the outside. 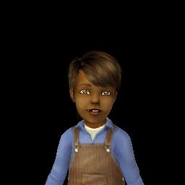 John Space as a Toddler. 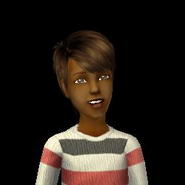 John Space as a Child.
Add an image to this gallery
Retrieved from "https://sims.fandom.com/wiki/Fanon:John_Space?oldid=730585"
Community content is available under CC-BY-SA unless otherwise noted.