Johnathan Redfield (nickname: John) was the main protagonist of A Sim's Tale: Book 1, a supporting character in Book 2 and Book 3, and a minor character in Book 4. By the time at Book 4, John was already died by old age.

He was the first son and the second child of Thomas and Magdalena Redfield, younger brother of Jessica Manhattan, elder brother of Dave Redfield, husband of Lily Redfield, father of Leona, Jean, and Chris Redfield, and adoptive father of Charlie Redfield.

John was born in Twinbrook August 12th 1978, his father was a successful businessman while his mother worked as a stylist. During his childhood, his parents were too busy with their job making him spend most of his time with his brother and sister.

As a child, John idolized his later grandfather who was a politician of the city. However, John's father saw that John's grandfather dream about free world was completely ridiculous and impossible to be realized.

In his teenage years, John was enrolled in boarding school, but not for a long time. During these years, he got a new neighbor, Lily Williams. They became friends and later, started dating. John graduated from high school with a B.

After graduated from high school, John was enrolled in Sims University, taking the communication degree and graduated with B grade. During these years, he met and befriended a friend named Simis Bachelor.

After he finished his college, John and Lily got married and they had twin daughters, Leona and Jean Redfield and a son, Chris who was born 5 years later.

John had a conflict with his father who wanted him to continue his step as a businessman while John didn't want to.

Felt depressed and sick with his job, John decided to moved to the other town to made his own life with his family. Thanks to an acquaintance John arrived in a town called Sunset Valley, which he thought to be a beautiful and peaceful place.

During his first visit, John would reunited with Simis who also lived in this town. After his decision supported by Lily and her parents, John resigned from the company.

John learned that Jean was sad about their decision to move away from Twinbrook. However, he consoled Jean and assured her that she would make new friends in this new town.

Days later, John visited a dive bar and had a meeting with Simis Bachelor, his friend in the college as well as his "partner-in-crime". They reminisced their university life before John told Simis the reason he moved to Sunset Valley. Accompanied by Simis, John headed to the City Hall and had a job interview with Vita Alto. Interested to his dream, Vita promptly accepted him to work directly under her, which made John happy.

John and his family later attended the Goth family's feast party. After an unfortunate conflict between his daughter, Leona and the Goth family's child, Mortimer, John met Nancy and Geoffrey Landgraab. He learned there was a rivalry between Alto's and Landgraab's and Vita and Nancy would fight in the mayor election.

Two months later, John was promoted to Campaign Fundraiser due to his impressive job performance.

In the night, John asked by Lily about the Altos' plan of demolishing Hogan's Deep Fried Diner, which he promptly said he was never heard about such a rumor.

Later, John witnessed a fight almost broke between Vita and Nancy's supporters, forcing him to call Gunther and Cornelia Goth to stop the two sides.

14 days before the mayor election, John felt that the town had changed forever since the citizens began to choosing sides and started acting coldly toward each other. Simis also already choose Nancy's side, and suggested him to choosing side quickly without being afraid they would become enemies even if he joined Vita's. He also learned Lily was in Nancy's side as well. However, was John afraid to become like the others and didn't want to decide. He started to felt that politic was cruel and questioned his grandfather's vision, which made Lily angry and slapped him in front of the public. John then cursed himself for becoming weak.

Seven days before the election, John was in his office when he overheard Vita's conversation with someone on phone and became horrified with what he heard.

Later, while accompanying Jean trying her new telescope, John saw Holly Alto sitting alone in the beach. John and Jean approached. He asked Jean to return home before he talk with Holly, who revealed him about her mother's true nature which shocked him.

John later accompanied Holly return to her house shortly after a group of strangers attack the house. One of the strangers claimed that Nancy Landgraab was the one who send them to attack the Altos, resulting in Nancy's arrest. John later had a little chat with Holly, who said that Nancy was not guilty and John agreed with her, stating that he knew.

Few days later, John told Simis about the truth behind the incident in Alto house. He also secretly had a meeting with Geoffrey Landgraab, promising to reveal anything he knew.

Vita Alto then declared as default winner of the mayor election. After attending the emergency meeting, John decided to visit Nancy in the prison while Simis volunteered himself to find proof in the Alto's house.

At the police station, John revealed to Nancy and Geoffrey that Vita paid the strangers to made a fake assault on her house and framed Nancy for it. When asked why he secretly turned against his own boss, John simply replied that he cared about Sunset Valley's future.

When he lost contact with Simis, John and Dieter volunteered to help Simis's family to help find him. After Simis was found, he finally learned the truth about Vita's plan, making him confront her in the next day, stating that he would uncover Vita's crime.

Unfortunately, John and his allies failed to gather proof. He and his friends were gathered in the Landgraab house when Holly came, giving something which she claimed could help. It was later revealed that the disk contained the footage Simis took during his infiltration on the Alto house.

In Vita's inauguration day, disguising as a technician, John sneaked in to the City Hall. He broadcast the footage and everyone saw it. He revealed Vita's crime to the public. However, the revelation driven Vita insane. When the mayor shot by Vita, John and the cops tried to help him. He then found that Vita was ran away. However, Vita was killed in an accident during her run. In the next day, John attended Vita's funeral along with Simis, the Goths, and the Landgraabs. He told Simis that he never expected that Vita would end like this.

Six months later, John was hanging out with Simis again in the dive bar, talking about the upcoming New Year holiday plan. John originally had no plan for the upcoming holiday, until he stated he knew where he should brought his family. It later revealed that the place where John brought them was his hometown, Twinbrook. John reunited with his family, including his father, Thomas. The father and son eventually reconciled.

John and Lily were helping their old friends, the Delgado family who just moved to Sunset Valley. In the next, he made a visit to the Delgado house again with Leona. He jokingly teased Leona about her possible feeling towards the Delgado's son, Enrico.

John with Lily, Leona, and Chris later came to City Hall to met Jean who just returned from France and picked her up.

In one day, John was playing chess with Simis in Bachelor house when his sister Jessica told him to watch the Equestrian race in Sport Channel. John and Simis watched the race, and he surprised seeing his niece, Eliza Manhattan, participating in the race.

When Lily told him about Chris' behaviour, John assumed that Chris had an imaginary friend. His assumption turned out to be true as Chris revealed it by himself. Eventually, thanks to a potion made by Jean, the imaginary friend, known as Charlie, became a real child. John gladly accepted him as member of Redfield family, adopting him. He later enrolled Charlie in the community school.

After 11 years, John finally selected as the Sunset Valley's new mayor. John was 46 years old when he became the mayor.

In one day, John visited by his old friend, a former-rock star called Walter West. John then showed Walter a video of Chris who made a cover for a rock song, causing the latter wanted to met Chris in person.

John, alongside Tamera and Sandi would attend Chris and Charlie's band competition in Bridgeport. He was so excited seeing his sons performing in the competition.

Ten years later, John, now 56 years old, had already retired from his job. John begun to had several health problems, however, he was often treated by Jean, who already became a doctor.

Years have passed, in his middle 60s, John started to weakened by his age and suffered several health problems. However, he managed to live long enough to saw his grandchildren grown up. In March 12th 2048, John passed away at 69 years old.

John's appearance as a child 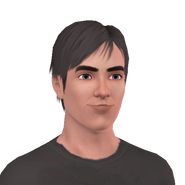 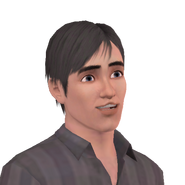 Age 46
Add an image to this gallery

Add an image to this gallery
Retrieved from "https://sims.fandom.com/wiki/Fanon:John_Redfield?oldid=832364"
Community content is available under CC-BY-SA unless otherwise noted.