Jodie Saint was created by Starmoonie. Jodie has been the playful daughter John always wanted but what her mother wanted was a hard worker. She never really pays attention in school, which her parents payed a hefty amount of simoleons for, and instead acts as the class clown.

Jodie is a very intelligent girl, but shes so used to having fun that she messes things up for herself because of her childish antics. She gets along with most of the kids in her neighborhood and also with her cousins as well. The girl can often be described as a bit of a tomboy, wearing nothing but jeans and playing around with mainly guys.

As a teen in Downtown, Jodie had many things to do. She often shopped in the malls, or hang out with the guys at the park, or even played hookey there from school. She was a Class Clown, because Jodie put Fun before Work. This made a her parents upset, especially her mother. It wasn't her fault though because her father often played jokes on her when she was supposed to be doing homework and thus making Jodie not take work seriously.

Her parents argued about her future and this took a bit of a tow on her. She often snuck out of the house to the park in Pleasantview to get away from her parents. This is where she met Dustin, who was hanging out as well from his mother. The two shared about each other's problems and found out both of their parents expect much more out of them than what they can provide. Jodie grew attach to him and became smitten with the boy, but she found out later he was dating Angela.

She didn't want to become in between them and just watched him from afar until the day her chance will come. One afternoon she decided to start to change her ways and become more responsible with her life, This made her finally choose what aspiration she wanted to become since she never chose when she turned into a teen. Her parents were happy but Jodie never promised she would give up on her dream, to become a Stand Up Comedian. 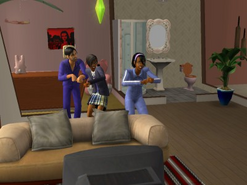 Jodie can simply bring her parents down a notch to have fun once in a while. 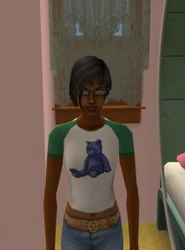 Jodie in her room.
Add an image to this gallery

Retrieved from "https://sims.fandom.com/wiki/Fanon:Jodie_Saint?oldid=716287"
Community content is available under CC-BY-SA unless otherwise noted.