Joanna Delgado is a sim featured in A Sim's Tale: Book 4 as a major supporting character. She is daughter of Enrico and Leona Delgado and younger sister of Nathaniel Delgado.

Joanna Delgado was born in Pleasantview (formerly known as Sunset Valley) in March 13th 2037. She was the second child of Enrico and Leona Delgado.

Joana's closest relationship she had was with her cousin, Christine, who was eleven months older than her, and of course, her maternal grandfather, John.

When Joanna was 10-11 years old, John passed away. Joanna was the one who most affected with John's death. However, she would overcame her sadness and managed to move on.

Joana grown up normally into teenagers. However, unlike her parents and her brother before her, Joana was very rebellious.

Despite this, Joana was able to graduated from high school.

Joanna now 19 years old. Unlike her cousins and brother, Joanna didn't went to college for some reasons, nor being employed. Her attitude often made her mother, Leona, upset. One day, Joanna even had an argument with Leona about her appearance.

Joanna's relationship with Christine was still close. When she heard that Christine was home for the summer break, she promptly asked her to hanging out in The Flamencos in order to hit the boys in there. Arriving at the club, Joanna and Christine reunited with their high school friends, Marlena Caliente and Malika Williams. Joanna was apparently forgot about Malika due to the change on her body shape but she did remember Marlena even though she mispronounced her name.

After several hours at the club, Joana returned home, accompanied by Christine. Joana found an attractive man was in her house. Attracted with Bryan, Joana attempted to flirt with him, only to be interrupted by Christine who entered her house bringing Joana's cellphone which left in Christine's car. Joana then learned that Bryan and Christine were known each other since the two already met.

Several days later, Joana introduced her boyfriend, Kevin to her parents, hoping they would give their blessing.

Later, Joanna was having another argument with Leona and decided to went to the Flamencos to relieved her stress. While on her way home, Joanna encountered, and attacked by none other than the Pleasantview Killer. Joanna survived the encounter, but it left her traumatized.

Another attack occurred when she was in the hospital. But this time she was saved by Leona. Following this second attack, Enrico tasked his subordinates the guard Joanna for every 24 hours.

Hanging out with Christine 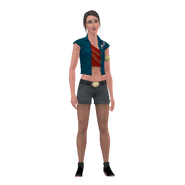 The comparison of teenage Joana and her mother.
Add an image to this gallery
Retrieved from "https://sims.fandom.com/wiki/Fanon:Joanna_Delgado?oldid=844767"
Community content is available under CC-BY-SA unless otherwise noted.