Joana Saint ,(Nee' Henson), was created by Starmoonie. Daughter of a local scientist, Joana lives up to her father's reputation of being a genius with a good heart. She married her love from a long time, it took some time due to her work and school, but she married that fool and is happy with the outcome of it.

Joana is kind and simply likes to study and have fun. She knew she was going to end up with her best friend, John, in the future but never made a move to him because she put work before love. Joana can be a bit competitive with people and she can't really cook.

Her family just moved to Sunset Valley a couple of weeks ago and she just made friends with John and wants to join a club at school. She enjoys fishing with John and talking abut random things with Katherine. It was later she knew she had to become something big in order to become someone.

In her teen years she focused on getting a job in the medical career, but was denied because she was too young. She couldn't even help out in the old folk's retirement homes because she didn't like the smell. When Ben's was eaten by their family pet, Billy the Cowplant, she felt a little sorry for her brother but found it quite funny how he died.

She grew up into an adult and finished school, she then married John and started her new job in the medical field. Her parents grew old and tired and soon passed on, both were buried in a local graveyard. After a lot of promotions, she stated she wanted a child to teach all her wisdom to. At first John was a bit concerned as if his wife more demanding on the subject, but went along to have the experience.

With a teen daughter to look after and the newest Medical Researcher at the Hospital, Joana seems to feel the pressure. She does not want her daughter to pursue her ridiculous dream and argues with her constantly about it. She does not know it effects her daughter's feelings to her and seems to ignore her husband's comments about supporting her dream.

When the family had to move to Downtown, Joana felt a little scared on what John has gotten himself into. The move didn't effect her feelings about her daughter but when Jodie explained she actually may change her idea and may become a detective like her father instead, this pleased her. She now works harder than ever and puts out time with her family on the weekends. 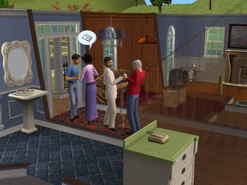 John and Joana chatting behind Matthew and Mortimer. 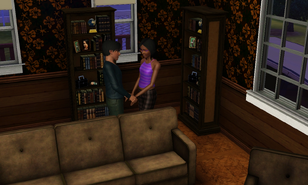 Joana and John as teens. 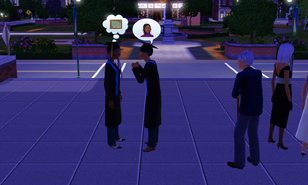 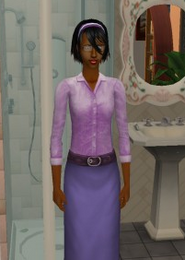 In The Sims 2
Add an image to this gallery

Retrieved from "https://sims.fandom.com/wiki/Fanon:Joana_Saint?oldid=768627"
Community content is available under CC-BY-SA unless otherwise noted.