Jestyn Leishman is a playable resident in my player stories in The Sims 2 in Pleasantview. He is the husband of Bunny Leishman (née Hardy) and the father of Amber and Dhemosse Leishman. He is of European / Maori descent. Jestyn has black hair in a helmet cut with sideburns and wears a khaki green jersey and dark grey sweat pants. He's at the top of the Law Enforcement career. Jestyn is voiced by Stephen Kearin and is 29 days from being an Elder.

Jestyn lives in 105 Sim Lane with his wife Bunny, their children Amber and Dhemosse, and their teenage roommate Suzy Parker who is Jestyn's perfect counterpart.

Despite being a Romance Sim, Jestyn doesn't want to commit affairs. He just wants a romance oriented life. His chosen aspiration doesn't make life easy for him and he has started an affair with his friend Nina Caliente. However Jestyn's wife Bunny is in the same boat - she has a non mutual crush on Goopy Letourneau (né Gilscarbo).

Jestyn's personality reflects that of a stereotypical self-centered bully. He is feuding with several other residents in Pleasantview; Benjamin Long, Abhijeet Deppiesse, Joe Carr, Kennedy Cox and Brandon Lillard (he has won fights with each of them). Jestyn also won a fight with Mrs. Crumplebottom because she had lectured him. Even though Jestyn won a fight with Goopy, it was probably a friendly fight because the two of them are best friends.

Despite Jestyn's aggressive nature, he has made friends with several other Pleasantview residents including his roommate Suzy, Daniel Pleasant and Dustin Broke. Jestyn also has good relationships with General Christy Stratton and her husband Amin Sims. 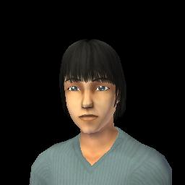 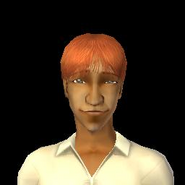 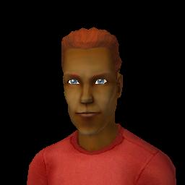 Jestyn's acquaintance Amin.
Add an image to this gallery

Retrieved from "https://sims.fandom.com/wiki/Fanon:Jestyn_Leishman?oldid=818396"
Community content is available under CC-BY-SA unless otherwise noted.