Jenson Beaker is the son of Loki and Circe Beaker. He is important as the husband of Sarah Beaker who used to be a Curious before her marriage. They got a son together called Lars.

Not much is known about Jenson's childhood, as most of the things that happened in the Beaker household was kept a secret. He lived together with an unrelated man to the family and for a while there was also an unrelated woman, but she left shortly after she came.

Jenson met Sarah and was not immediately in love. He's not the person to go crazy about feelings and stuff. However he did like her, and he heard many interesting things about her family. They started a friendship, but he noticed that she was falling in love. Oddly enough their friendship stopped for a while, why they stopped talking he's still not sure about but he was happy that it was just for a moment. They started to act more romantical this time now. They shared their first kiss and things went well for them.

When Sarah asks him to move in he realised that they ARE in a really serious relationship and that this might be the woman of his dreams. He proposes to her like a real man should do and they got married. When Sarah reveals her pregnancy he's sure about it; he adores this woman! They get an alien baby boy named Lars. Jenson is convinced that his son is very special.

Jenson loved his work and earned promotions like it was nothing. He taught his son how to talk and potty trained him. He was excited when Lars got into private school just like himself. When he got on the top his career he heard both his parents died in a strange science experiment. This makes him sad, but he also understand that his parents were already old and lived a dangerous long life.

When Jenson is old enough, he leaves his pirate life for what it is and retires. Not much later his son turns into an adult and he and his wife Sarah decide it's time to let Lars start his own family, so they move out of the Curious household. He his happy to become a grandfather of Lotus, and together with Sarah he spoils the little guy. When Lotus is a toddler Jenson dies of old age. 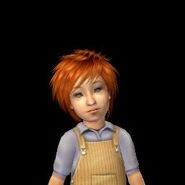 Jenson as a toddler. 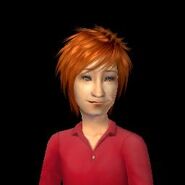 Jenson as a child. 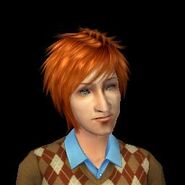 Jenson as a teen. 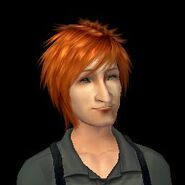 Jenson as an adult. 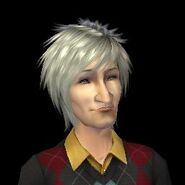 Jenson as an elder.

Jenson's family tree.
Add an image to this gallery
Retrieved from "https://sims.fandom.com/wiki/Fanon:Jenson_Beaker?oldid=743021"
Community content is available under CC-BY-SA unless otherwise noted.