Jenna wears a lot of blue stylish clothes. Her style is very princessy.

Jenna's family were one of the many that lost their homes. Her family wouldn't budge, so Noah Moocher burned the house down, while her family was inside. He made her watch.

She was taken back to the Moocher home, and raised as one of their own. Megan didn't like her, and used her as a scape-goat sidekick. When Megan died, Jenna saw it as a fresh start. She took the money Megan had with her, and fled for Sunset Valley.

Jenna got herself settled in a small house, with some of the money. She intended to pay it back. To make sure to earn it, she got a job at the military base. At work, she met Alexander. Jenna couldn't understand why Megan would want to hurt him. They went on a date, and it was obvious there was a strong connection between them. Jenna didn't want to reveal her identity in case it made Alexander angry. She didn't want to lose him.

Alexander took Jenna out on a few dates, and they fell deeply in love. She wanted to marry him, but the last thing she wanted to do was ruin their relationship by pressuring him into something he wasn't ready for. He told her that marriage was not entirely off the cards, he just needed time. To show her some kind of commitment, he asked her to move in and proposed. Jenna was thrilled to accept both proposals.

Jenna lived quite happily in the Goth home. She never mentioned where her money came from, she just pretended that it was her own family funds, and merged it with the family account.

After Michael's passing, Alexander suggested that they get married because he didn't want to end up like Michael, stalling love all the way to the grave. They got married at the beach, all of the family were there.

Jenna discovered that she was pregnant. She rushed to tell everyone in the house. Finally she had the family she always dreamed of. Alexander took care of her, as well as Bella. As soon as she went into labour, she was rushed to the hospital by Alexander. Their son was named Edgar.

She doted on him, proud of her adorable little son.

After Bella's passing, Jenna decided to give up her job, to spend more time with her son. He was sad at the loss of his grandmother, even though he did not understand what had happened. She worried for Mortimer, because it seemed his own heart had died with Bella.

Jenna became like a nurse to her elderly father-in-law. Making sure he eats, or leaves the rocking chair in the parlour. She tends to the plant pot garden in the greenhouse, and lies to her husband that Mortimer took care of it. Jenna hates the lying, but it would worry Alexander too much.

Even though they were never that close, Jenna still felt extremely sad about Mortimer's passing. In his memory, she kept the garden in the greenhouse. Tending to it, and keeping it alive.

Jenna felt her son growing distant from her, and keeping secrets. She wanted him to open up and tell her, but she had to accept that most teens are not exactly forthcoming. Jenna was unaware of the big secret her husband and son were keeping from her.

Jenna spends her days in the house, listening to her niece play the guitar, whenever she can.

She believed her life was over, when a fire broke out in the parlour, while she was happily reading a book. Her own son produced a wand, and put it out with some kind of ice spell. He told her that he had become a witch. Jenna accepted that, and asked him not to fear telling her anything. She would love him, even if he joined the criminal career one day.

Jenna started to feel ill, vomiting a lot, no matter what she ate, she felt nausious. Whatever it was, she did not feel the need to tell Alexander, he had plenty to worry about without this added to it.

Being pregnant was not part of her plans. She asked Cassandra to examine her, and tell her the gender of the baby. A girl. In that moment Jenna knew that Cassandra and Adrian would care for the baby, and give it a good life. They lived in the same house, so she would still see the little girl.

Jenna went into labour at home. She gave birth to the girl, and named her Georgina. The baby was given to Cassandra.

Jenna watched over her daughter, but never stepped on Cassandra's toes. She supported Alexander in his career, she was quite proud that he had become an astronaut. Jenna was an astronaut's wife.

Being a caring aunt, she comforted Aria, after her break up with her boyfriend. She was the first to notice Aria's pregnancy. Jenna helped make the arrangements for the baby. Taking care of the new born baby girl was part of her guilt, for giving up her own baby.

She was one of the few members of the family at home, when Adrian passed away.

The biggest shock of her life, was when her son went out to patrol the valley, and came home the following day with a wife.

Jenna hated Maria right away. When Jenna looked at her, all she saw was a gold digger. Plain and simple. Her hope was that her son would see sense and divorce her.

Cassandra's passing saddened her as much as it did her husband. Jenna went to the graveyard in their garden every morning, to pay respect to Cassandra.

She did not pass her disdain for Maria onto her grandson, when he was born. Honestly, Jenna loved Dexter with all of her heart.

Alexander took her on a date. They went to the theatre to see a show, then ate outside at the bistro. Upon their return to the house, they cuddled up on the sofa. Jenna gave him one last kiss. She left the parlour, and never returned. 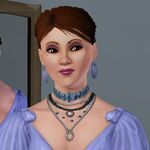 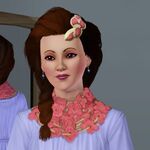 Young Adult outfit 2, and Adult.
Add an image to this gallery
Retrieved from "https://sims.fandom.com/wiki/Fanon:Jenna_Goth?oldid=626031"
Community content is available under CC-BY-SA unless otherwise noted.