She's one of main characters in A Sim's Tale series; a deuteragonist in Book 1 and Book 2, and a supporting character in Book 3 and Book 4.

Jean was born in Twinbrook, February 14th 2004. She was the younger of the twin, making her the middle child of her family. During their time in the town, Leona and Jean were friends with their neighbors, Annie and Enrico Delgado. However, the Delgado family moved to the other town after a year lived in Twinbrook.

Several years later, after her father, John, had a conflict with her grandfather, Thomas, Jean and her family left Twinbrook and moved to Sunset Valley.

Jean was 9 years old when they moved.

Unlike Leona, Jean originally didn't wanted to move to Sunset Valley and afraid won't be made any friends with everyone in the new town. At some point after her arrival, Jean would met Alex Curtiz, a boy who lived not far from her house.

In her first day of school, Jean and Leona met their first friend, Bella Bachelor during their way to the school and later introduced to other children such Darlene Bunch, Kaylynn Langerak, and Mortimer Goth (even though Mortimer was acting coldly toward the Redfield twins at first).

Jean became very close with Alex after the latter attempted to won a telescope for her, even though he failed, Jean appreciated his intention. However, in a later day, Alex would won a telescope and gave it to her.

Following the arrest of Nancy Landgraab, Jean and her friends decided to checked Malcolm in his home to gave him support.

Several months after moved to the town, Jean and her family would returned to made a visit to her grandparents house in Twinbrook, when she witnessed her father getting reconciled with her grandfather.

Several years later, Jean would would passed the elementary and middle schools, becoming a high schooler. Jean was recognized as one of the smartest students in the Community High School.

When her uncle, Peter Manhattan had an accident, she and her family promptly came to Appalosa Plain to checked on his condition.

During her third year, Jean, now 16 years old, was chosen to participate in the student exchange program in France for one month. In the beginning of the story, Jean was already left for three weeks. During this time, Jean was dating a fellow student, Trigger Broke.

Jean's return to Sunset Valley was earlier than everybody thought. After she returned home, she reunited with her friends, including Enrico and Annie who just moved to the town. In a later day, Alex would confessed his love for her, but Jean was confused to gave him an answer since she was dating Trigger. After convinced by Leona and Bella, Jean eventually told Alex the truth about her relationship. However, Jean got a shocking news, Alex revealed that he had to move to Roaring Heights in the next month, that means her answer would not affect him.

It appeared that the news gave her an impact as she started to acting nervous whenever she met Alex. At some point, Jean also broke up with Trigger, claiming she simply couldn't handle a long distance relationship.

In one day, Jean was asked by Chris to help him made an Imaginary Friend Metamorphium Potion,but Jean declined as she didn't believe in myth, angering him. When Chris presumed missing, she and Leona went to find him. They that Chris, accompanied by Alex and Tamera, actually went to the Sunset Valley's old mine to find a Rainbow Gem, where they met and confront Big Steve Underwood. After finding the gem, Jean started to figure out how to made the potion.

During the prom, Jean finally revealed her true feelings toward Alex and the two shared a kiss. In the day when Alex's family moved out, Jean and Alex had one last conversation before bid farewell to each others.

Four years later, Jean, who was 20 years old enrolled in Sims University alongside Leona, Bella, and Astrid, taking Science and Medicine major. Jean became one of the university's renowned students due to her perfect essays and presentations.

Jean's main problem was that she still couldn't forget Alex and still waiting for him. Unknown to Jean, Alex would be enrolled in the Sim University in the next semester as the latter already made a visit to the university.

During her semester break, she and Leona returned home for several weeks and would attend a reunion with their other friends.

The most surprising moment was when Alex Curtiz suddenly appeared before them. Jean was mad at first, but, after hearing Alex's explanation, she and the latter finally reconciled and officially became a couple.

Ten years later, Jean, now 30 years old, would eventually became a doctor, a neurosurgeon. She also married to Alex and had a son who they named Daniel.

Little detailed about Jean's life shortly after her marriage.

Jean was still working as a doctor. She also acted as a personal doctor for her father, John. However, sometime in 2048, John Redfield died from old age. Jean and her family was attending John's funeral. She also tried to comfort her mother, Lily.

Eight years later, Jean was now 52 years old. Jean discovered that her son, Daniel was secretly gay. She learned that Daniel was very depressed after his secret was found out by his co-worker. Jean was worried about her son. After got an advice from Leona, Jean decided to talk to her son and encourage him. She also revealed her son's situation to her husband, Alex.

When Jean met Bryan Schmidt for the first time, she felt that Bryan was familiar. Jean then learned the fact that Bryan's mother was her old friend, Joyce and became sad after known that she already passed away. 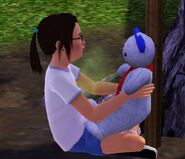 Jean and her snowy the snow bear 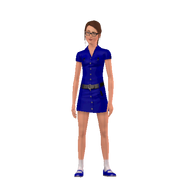 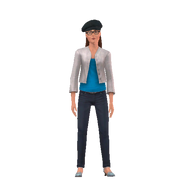 Jean's outfit when she was returned from France 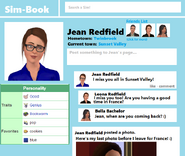 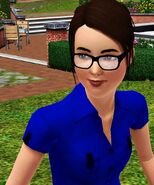 Playing in beach with Leona

Jean with a sprite in Oasis Landing

Jean with her hair down

Twins
Add an image to this gallery 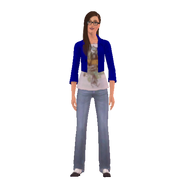 Jean through the ages

Jean with her family

Going to the class

At her dorm (with Leona at the background)

reunion
Add an image to this gallery
Retrieved from "https://sims.fandom.com/wiki/Fanon:Jean_Redfield?oldid=848881"
Community content is available under CC-BY-SA unless otherwise noted.