Jason Whelan is a Sim created by JennaLorena (talk). He appears only in The Sims 2. He is the son of Elise and Bernie Whelan, as well as the brother of his parents unborn child.

Since his parents aren't even alive in The Sims 3, he has yet to be born.

Jason only appears in The Sims 2. He lives in Pleasantview with his mother and father. He is close with his parents, grandparents, aunt, and uncle. He, like Percy and Mariah, are best friends with his grandmother.

Jason has characteristics of both his mother and his father. He shares his black hair with his mother, but has the significant eye shape of his father.

Jason appears to be quite spoiled, and resents the idea of another child sharing his parents attention. His worries seem to go unnoticed by his family, who think he's perfectly happy with the bundle of joy arriving. 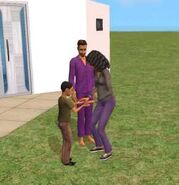 Jason playing Slaps with Elise
Add an image to this gallery
Retrieved from "https://sims.fandom.com/wiki/Fanon:Jason_Whelan?oldid=673664"
Community content is available under CC-BY-SA unless otherwise noted.