Jane Lisa Garvouis is the daughter of Ursula Garvouis, and a medieval Knight, Sir James, at service of King Edward II. Jane would live most of her life in Bonningthon, the town that would later give origin to Riverview, where her mother is from.

Jane was born in the court of King Edward. She grew up not knowing who her mother was, being told she had died from childbirth complications.

As a child, she grew up quite happily in the court. As her father was a very respectable and trustable member of the court, Jane was assigned to become a maid of honor of the future Queen, Princess Mary, when she was of age. However, this meant she would not be allowed to marry.

When Jane was a teenager, she was grief-striken, as her father had died in one of the battles to conquer the next-door Kingdom, ruled by Pirates who had overthrown the previous King. It was also by this time that Jane started being indocrinated into how she should conduct herself as a dame of Honor. It was expected that King Edward would die, and Princess Mary to succeed very soon.

Even though Jane did accept and cherish the role assigned to her, she would also not adhere to all the strict rules imposed. She often dressed up in a way bards did and would go to festivals and parties, very often disguised. She would also loved to go riding, as her father had shown her how to since she was a little kid.

However, Princess Mary became the Queen and these little distractions Jane had were soon put to an end.

Jane was set to attend the queen on various occasions. One time, she was assigned to go to the forest to pick wildflowers. She was afraid of bears and wild animals but went there, regardless, with the companion of a guard.

Suddenly, she was approached by a young woman, covered in a white blanket, who told her she was her mother and that Jane should come with her, to the future, where she belonged. Completely baffled, Jane was curious, regardless, noting that the woman was indeed very similar to her. Gullible and believing this to be some kind of sorcery that could save her from her mundane life, Jane went with the woman.

Upon reaching a huge, seemingly old tree with fallen branches on the ground, Ursula reached for Jane's hand. She then pressed a red spot, where there was a white circle surrounding it, on the tree's trunk. Suddenly, the ground beneath them disappeared - they were both traveling to the future.

Jane and Ursula came out of the Time Machine. Jane was immediately astounded at the view - the house was very different from houses she had seen before - not being build from rock or wood, but instead odd materials.

Jane was, however, scared at the big black boxes where people appeared and disappeared without a trace. You couldn't even touch them, but they would talk at you! She also did not know how to read or write, which made adaption to this life even harder. All the family members appeared to be weirded out by her and she barely felt close to her own mother.

Indeed, Jane was told by her mother she could have a family then, and men actually seemed very interested in Jane. Jane, however, felt they were not real Men Sims at all due to the way they behaved. They seemed immature and very inappropriate.

Feeling like a fish out of water, Jane was determined to go back to the Kingdom where she belonged. She went to the Time Machine in hopes of being back to Bonningthon.

However, she instead ended up in medieval China, in the middle of the woods. Night was falling and Jane not knowing where she was, was very scared.

Three gentlemen riding horses were going through the woods to reach a camp nearby, when they heard noises coming from the leaves. It was dark, and one of them saw a shadow moving it. Thinking it was a wolf, he launched an arrow, hitting her leg. Jane tried not to scream, but one of the man thought he had heard quiet cries.

Hong Ming-Chua was a Fearless Knight - he stepped out of his horse, putting the tree branches aside. He caught a glimpse of a blue dress behind a rock, so he went over. Realizing it was a young woman, Hong was fascinated by what he saw - he had never seen a woman who looked like Jane. He wanted to carry her into safety.

At first, afraid of being kidnapped or killed, Jane struggled to let him put his hands around her, but his gentle manner and voice convinced her.

The men planned to pass the mountains, but agreed they needed a rest. So, they went back to a tent, in the middle of a valley.

Jane wasn't scared anymore and Knight Hong Ming-Chua would stay with her and take care of her small wound. They couldn't understand each other's words, but whenever their eyes met, a sense of familiarity grew - it was a feeling not even words could explain. They became romantically involved that night, and Jane would become pregnant.

Jane would spend the following days trying to learn Chinese. They had to stay at the camp, as in mountains it was very cold and visibly snowing. Jane stayed at the tent while the men went hunting. Jane gave birth to a healthy baby boy, who she named Ben Jie Ming, alone in the tent.

However, the three men seemed to never come back and Jane afraid they would not, went to with her baby to see if she could catch sight of them.

She would trip on a rock and both she and her son would fall in a hole - suddenly they were time traveling.

Jane and her son were spit out of the Time Machine. In Riverview, it was still the same day she had left. Her mother Ursula was astonished at learning of her adventure and her grandson. Jane wanted to go back, though.

She wished to find Hong Ming-Chua and she wanted to have a family, but where she belonged. Unlike her mother, she knew she could never leave her baby. So, she snuck out and went to the Time Machine, hoping to go back to China or her place.

As Jane and her baby son were travelling in a colorful circle, there seemed to be a lot of interference and they were being dragged around the circle, instead of going forward.

They unexpectedly came across a door. The door opened and Grim Reaper was on the other side. He announced the Time Machine only had power to bring one person forward, but he could save them both if Jane managed to play the guitar really good, handing one to her.

Jane tried remembering how bards use to play it, as she had never learned. She tried, but Grim Reaper informed it wasn't good enough. He laughed and began to shut the door, while Jane was being dragged to the circle again. In despair, Jane threw her baby at the door before it could close - and her son was dragged to the other side of the circle, managing to go forward.

Jane, however, would go around in circles. When she arrived her destination, which was actually set in a very distant future, she was already dust due to how much time had already passed. Because the Time Machine was broken, there was only room for one person to travel at a time without suffering the effects of time.

Unknowingly, Jane was able to save her baby in that last moment of despair. 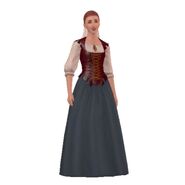 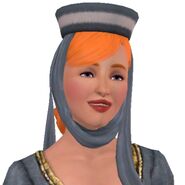 Jane's original hair color when she came from the Time Machine. 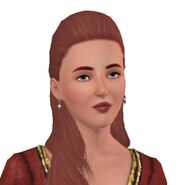 Jane's outfit in court, as a teenager. 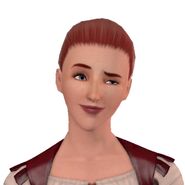 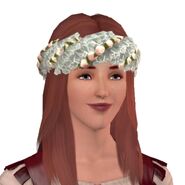 Jane as how she would have dressed for Medieval parties at the Tavern. 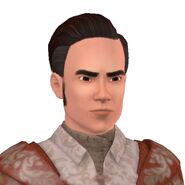 The man Jane would fall in love with, Knight Hong Ming-Chua.
Add an image to this gallery 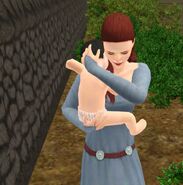 Jane holding on to her son.
Add an image to this gallery

This poll is just for fun! Have a laugh and don't take it seriously!

I know this will actually seem really silly and perhaps dumb, lol. But I actually showed my Sims to my family, we ended up having a debate. My brother thinks Jane is the prettiest of the family so far, my grandma is indecisive, while I think Marissa is slightly prettier. I do think both are very pretty! I also think Constance really downplays her beauty. You should see her as a young adult, with no glasses and hair down!

Retrieved from "https://sims.fandom.com/wiki/Fanon:Jane_Garvouis?oldid=882107"
Community content is available under CC-BY-SA unless otherwise noted.