Jacob Finch is a Sim created by Sophic2. He is the second child of Bob Zorgeloos and son to the deceased Mary Finch. He lives together with his half-brother Harry and his mother Hanna locked in Bob's garage. He has traits which could be considered as bad, because he wasn't properly raised, as he grew up in the garage of his father.

Jacob had a terrible youth, he saw his mother dying in the garage of Bob's home of starvation when he was just a baby. Later on, he was raised by Hanna. He has never been taught to walk, talk or to use the potty, because he there wasn't a potty in the garage and because Hanna tried to survive herself, thinking that her children wouldn't need to know these skills.

As a child, he wasn't able to go to school, as he was locked in his father's garage. He was never taken away by the social worker, as he had not skipped too many days of school (weekends, holidays, snow days etc.). Due to an extraordinary severe winter, nearly all school days were replaced by days off.

As he saw the ghost of his mother appearing at night sometimes, he developped an interest in ghosts and the paranormal. Though he has never really seen a vampire or a witch, he imagines how that creature would look like, and he had a fascination in those creatures anyway.

When he grew into a teen, you could see that he looked a lot like his dad. He and his dad has got the same hair color, hair style and skin type.

Jacob wasn't as rebellious as his half-brother when he was a teen, however his traits are 'worse'. He pulled pranks on chairs and on the toilet and so lost his best friend relationship with his half-brother.

He wasn't sad that he could not meet anyone else or have a girlfriend, because he didn't have an example, he didn't know how it looked like.

Jacob gained the Handiness skill so that the shower and the toilet could finally be fixed.

Jacob grew op with the 'Dislikes Children' trait. Because of his fascination for the dead, he wanted to work in the Fortune Teller career.

Hanna and Jacob became very good friends. All of sudden, they began to flirt, to kiss, and to WooHoo (in the shower). They didn't try for a baby, because Jacob doesn't like children and because Hanna was getting too old.

After Bob died, he, Hanna and Harry were rescued from the garage by Emma. They moved to another bigger house in Moonlight Falls. Finally he met the outdoors and he could realise his dream to become a fortune teller.

It became clear that he got lots of talent for fortune telling as almost everyone was satisfied by his private readings.

During his stay with the rest of his family, he was getting closer with his half-sister Layla, but he became arch-enemies with his older half-brother Harry. Nobody in the house knew exactly what was going on. A few days later, Jacob's dead body was found in the pool at the backyard. Everyone blamed Harry of pushing him, but it might also have been a suicidal act. The tensions in the house increased. 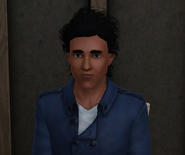 Jacob as a young adult
Add an image to this gallery
Retrieved from "https://sims.fandom.com/wiki/Fanon:Jacob_Finch?oldid=639479"
Community content is available under CC-BY-SA unless otherwise noted.