Izcrazi Watson was created by Starmoonie. His name is pronounced "I-iz-crazy", just to let you guys know. Izcrazi insanity really kicked in when he turned 28 after his parents death in a fire. He was then turned in to his younger sister to be taken care of. Izcrazi is featured in the fanon, The fall of Twinbrook.

As the brother of Nova, Izcrazi thought he was supposed to take care of his younger sister but things didn't go that why because of his mental health. Doctors and Scientists did not know what is the cause of his condition so the only thing they could do was let him stay with his sister so he would be taken care for.

Izcrazi was hospitalized a couple of times because his insanity became a burden to Nova at times and he was more aggressive towards anyone who cared for him. He was given medicine and was sent to surgery to open his skull to examine his brain to find anything unusual with it. Nothing showed up and Medical Scientists thought he was just faking his actions for attention, this infuriated Nova.

She blamed the Hospital for Izcrazi's mental health and promised to get revenge on them when they least expect it. Noah knew it wasn't most of Izcrazi's fault he is the way he is, Nova too was secretly conducting experiments on his body since her earlier middle school years. Izcrazi just doesn't seem to remember nor gave it any clue if it was really his sister who made him this way. 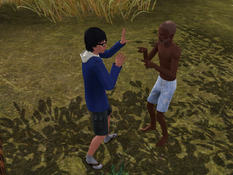 Noah: Man, why are you out here in your swim trunks? 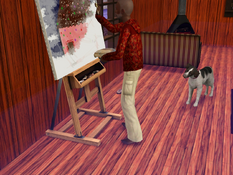 Izcrazi doing his thing.
Add an image to this gallery

Retrieved from "https://sims.fandom.com/wiki/Fanon:Izcrazi_Watson?oldid=705352"
Community content is available under CC-BY-SA unless otherwise noted.