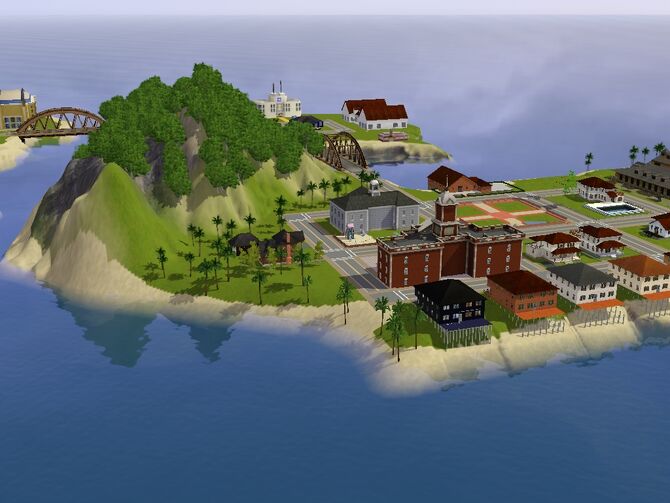 The Free State of Howlgard is a small town-state established by Vladimir Vargheim and his family many years ago. Originally meant to be a safe haven for the good-willed and less destructive werewolves of the world, it has become a busy, though quiet, little municipality and attracts much attention from supernatural fans across the nation.

Howlgard consists of an archipelago of four small islands: two more mountainous than the others. The largest island contains the majority of the residential lots, the smallest being near the centre of the island and the larger ones sitting on the coastline. The school, park, festival ground and city hall are also located on this island. Another, slightly smaller island plays host to most of the community lots in Howlgard, such as the Plaza, police station and fire station. Connected by land bridges are two smaller islets to contain an assortment of lots.

The smallest island simply supports the lighthouse. It serves no other function.

When Howlgard was established, it was politically independent of any other entity. However, the Vargheim family concluded that the town could not survive on its own, so it requested for SimNation to annex it as a territory. Howlgard, despite being a town on its own, gained State status in 1856. It remained in the Union during the Sim Civil War. However, the war was never brought to Howlgardian soil, and no Howlgardians ever fought in the Union Army.

Howlgard's government is de facto run as a wolf pack. The Alpha of Howlgard is the head of the House of Vargheim, and is the leader of the city. Officially, the Alpha also simultaneously holds the post of Howlgardian Mayor and Governor, a unique case in SimNation. The incumbent Alpha is Anton Vargheim IV. The Beta of the pack, the Alpha's deputy, is Anton's younger sister, Ursula.

There are 13 families in Howlgard, quite a few of which are in some way or other related to the Vargheim family, either through marriage or through descent.

The Vargheim family are the founders of Howlgard. For years they had helped to steer Howlgard in its long process of development. But the children of the next generation of Vargheims want to pursue careers other than heading the small town, much to the distress of their parents, Anton and Deanna. Which will give: the Vargheim's legacy of leadership, or the aspirations of the family's youngsters?

The Vargheim family is the founding family of the town of Howlgard. A family of mostly pure-bred werewolves with the exception of Deanna, who is human, and Atheia, who is a mermaid; the Vargheims' efforts have inspired other werewolves to stand up for themselves.

Anton III, despite being the patriarch of the Vargheim clan, decided to kindheartedly leave the majority of the family fortune to his children, splitting it up evenly between them. Now that he and his wife live together with resurrected sister Leia to raise, how will they fare with the relative lack of funds?

The Old Vargheims household consists of Vargheim patriarch Anton III, his wife Elizabeth, and his older sister Leia, who was resurrected and is still a child.

Encompassing three generations, the Tolstoy family is related to the Vargheim family in the fact that Anna is a Vargheim family member. However, Anna has preferred to keep a low profile, opting to live a normal, peaceful life with her husband, son, daughter-in-law and two grandchildren. But how long will it last before the cat is let out of the bag?

The Tolstoy family has three generations in its household. Anna Tolstoy (née Vargheim), is the daughter of Anton Vargheim II and so gets a lot of attention from the general public.

With their vampiric aunt being so playful, there was nothing to stop the inseparable René and James Bianchini from initiating countless hopeless romantic affairs. Now that James has caught the attention of Julia Blanchett, will the twins' relationship be affected?

The Bianchini brothers are two hopeless romantics that got along very well... that is, until James met Julia.

Recent arrivals in Howlgard, the Varulv family came to town to raise their two young werewolf sons. Will their efforts be in vain?

The Varulv family is a werewolf family that recently arrived in Howlgard in the hope that Nikolai and Jonathan would have better opportunities in the so-called Werewolf Town.

One of the few human families in Howlgard, the Leontókados family has made quite a home for themselves. The two children, especially Noah, are noted for their bravery and intelligence. Alexander has a thriving career in the fields of science and Marie is a doctor. Could things get better or worse for this little family?

As the description suggests, the Leontókadoses are one of the handful of human households living in Howlgard.

The Blanchett family is said to have a long line of sorcerers and witches. Julia certainly seems to exhibit these characteristics.

The Blanchetts are a half-human half-witch family that have recently moved to Howlgard as of the start of the game. Though all the males in the family so far seem to be normal humans, the females, such as Julia and Athena, appear to show signs of being witches. Julia and James Bianchini are currently dating.

Single parent Thomas Hermann has been raising his two young children Julian and Emerald since the untimely demise of his wife, Marie, from electrocution. When the Hermann family moved to Howlgard, did the ghost of his wife follow them?

The Hermann family is one featuring a playable ghost, Marie Hermann, and three werewolves: Thomas, Julian and Emerald. As of the start of the game, they have recently relocated to Howlgard following the death of Marie, whose ghost moved with them.

The Snows are ironically one of the warmest households in Howlgard. They've taken in a total of four children and now live happily in a house on the coastline of the town's largest island.

The Snow family is composed of Rainer and Emily Snow, a married couple that have adopted four children: Yuki, Winter, Eira and Herman.

A family of horse-lovers, the Trotham family has always had at least one horse as a pet throughout their history. The current family horse, Gaitjumper, has received bundles of love from former university students Holly and Toni, as well as their younger sister, the little Suzanna. However, Rory threatens to end the Trotham's streak of horse-loving, instead favouring his beagle, Bugler. Will he ever warm up to Gaitjumper?

The Trotham family is a family of horse fans that recently moved to Howlgard following the sudden deaths of their parents with their two pets Gaitjumper, a horse; and Bugler, a dog. Rory, a werewolf, seems to prefer the company of Bugler to that of his sisters and their horse.

They're vampires. Who else could they be? The van Drach family have been in Howlgard long enough to strike fear into the hearts of the non-supernatural population. However, young Dawn is attempting to loosen the grip of fear her family holds over the populace. Will she succeed?

The van Drach family are vampires who had relocated to Howlgard from Moonlight Falls several years in order to stay away from the possibly negative influences on the children, Samuel and Dawn. Rudolf, a single parent, has unintentionally made the human populace of Howlgard fearful, but Rudolf cannot be bothered to rectify this. Dawn, however, aspires to dismantle the family's bad reputation.

Retrieved from "https://sims.fandom.com/wiki/Fanon:Howlgard?oldid=698869"
Community content is available under CC-BY-SA unless otherwise noted.