Fanon of Preexisting Sim
This page is about a preexisting Sim in a fanon setting. This article should not be treated as an canon article. For information about the canon Sim, visit here: Holly Alto

Holly Alto is a sim featured as a supporting character in A Sim's Tale fanon. She is the only child of the Alto family. Being a Sim with the Good trait, she is the exact opposite with her parents. She totally against her parents' evil plan to changed Sunset Valley.

In A Sim's Tale: Book 2, though didn't had role in the story, Holly mentioned by Nancy and Geoffrey Landgraab and her picture was used as a front cover of a magazine.

Holly returns as a major supporting character in the spin-off mini-series A Sim's Tale: The Equestrian.

Holly supposed to be went on a field trip, however, her mother most likely forgot to signed the permission slip, causing her unable to join her friends.

A week before the election, Holly somehow knew about her mother's evil plan to defeat Nancy, however, she couldn't do anything to stop her.

In one day, Holly stayed out after curfew and encounter John Redfield in the beach. There, Holly revealed her mother's true nature and ambition. She suggested to John that he should turned against her for the sake of the town's future. In the middle of the conversation, Holly got a phone-call and learned that her house was attacked.

Holly returned to her house and saw the attackers were already captured, and claimed they were sent by Nancy Landgraab, causing Nancy to be arrested. However, Holly knew that the attack was actually orchestrated by Vita herself.

Her mother then won the election by default.

Somehow, Holly managed to got a copy of the footage Simis Bachelor took during his infiltration to her house. She presented the copy to the Landgraabs, claiming that it would help. Her act ultimately led to her mother's downfall.

Later, after Vita died in a car accident--when she tried to ran away from the police, Holly and her father attended Vita's funeral. Nick decided to "pay his past mistake" by allowing the police to arrest him. Before departed, Nick promised Holly to became a better father for her once he released.

Nancy Landgraab, who felt sympathetic toward her, decided to became her caretaker... At least until Nick released from the prison.

It later revealed that Nancy planned to enrolled her in Sims University.

Holly moved to Bridgeport shortly after her father died. She became a successful businesswoman after years living in the city and ran a company. She also became a famous motivator and writer.

In one day, Holly visited Appaloosa Plains to met someone in the JRA International Equestrian Center. On her way to the lot, she stopped in front of an Equestrian Training Grounds and asked Eliza Manhattan the direction to the Equestrian Center.

Holly spent several days living with the Manhattans until her car was finally fixed and she returned to Bridgeport. She supported Eliza to participate in the race. 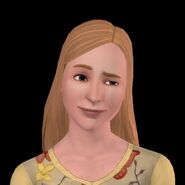 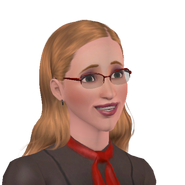 Age 24
Add an image to this gallery

Add an image to this gallery
Retrieved from "https://sims.fandom.com/wiki/Fanon:Holly_Alto_(A_Sim%27s_Tale)?oldid=779547"
Community content is available under CC-BY-SA unless otherwise noted.