Life Leading Up In The Sims 3: Supernatural Edit

In The Sims 3, she lives together with her young adult child Harry and foster son Jacob (Mary's child), locked in the garage at Bob Zorgeloos' house.

When she and Bob moved together to Moonlight Falls after graduating from college, they were a wonderful couple. Hanna was a talented cook and she started working as a kitchen scullion at the bistro. But accidentally, Hanna became pregnant too early. When Bob heard about this, he became furious. This might be the reason why he locked the pregnant Hanna in his garage.

After a short while, a second women joined her in the garage, called Mary, who was also pregnant with Bob. She had a hard time being pregnant, giving birth to children and raising the kids in appalling circumstances. The place was full of garbage, the shower and toilet were broken, there was just one fridge, no stove, no sink, and just one crib and one bunk bed. Mary couldn't handle this situation any longer and shortly after she gave birth to Jacob, she died by starvarion.

She has a son Harry with Bob. When Mary died, she also had to take care of Jacob, Mary and Bob's son.

Mary's death left Hanna with a double feeling: it was an emtionally rough moment for Hanna, she stood alone to take care of two toddlers: Mary's son Jacob and her own son Harry. On the other side, she was angry at Mary, because she cheated on Bob, who was her 'prince on a white horse' and 'eternal lover'. This is a big point of difference with the Sims 2 story, where Hanna and Mary had a romantic relationship while they were locked.

She spent most of the time trying to survive and not starve herself. She didn't pay a lot of attention to the kids when they were toddlers. She has never learnt them to walk, talk or to use the potty (because there wasn't a potty), because they were likely to never ever need those skills in their lives. She never preferred her own son, she always treated the children equally and always tried to act the best she could.

She would have loved to become a professional cook, but she got fired when she didn't show up at work twice in a row.

When Harry and Jacob grew into children, she feared that they would be taken away by the social worker as they weren't able to attend school, as they were locked in the garage. But due to an extraordinarily severe winter, almost all school days became 'snow days'.

When Harry and Jacob grew into teenagers, it wasn't easy to handle them, because they wanted to explore the world, see real light, talk to other people,... Particularly Harry was very rude to his mother when he hit puberty, they even fought against each other. Hanna had a better relationship with Jacob than with her own son, which lead to jealousy and drama in the garage.

The tension between her and her son became even worse when she started flirting with Jacob, when he became a young adult. Hanna and Jacob aren't relatives and they were both (Hanna more than Jacob, because Jacob doesn't really know what love means) longing to love. They flirted, they kissed and they WooHooed (in the shower). They didn't want any children because Jacob dislikes children, because Hanna was close to becoming an elder and because they didn't want another child to be grown in this 'garage of doom'.

Becoming old, she became optimistic again about her life. As she had her boyfriend Jacob by her side. She hated her lifestyle in the garage though, but she got used to it as she was there already 2 Sim Years.

When she was 96 days old and when she felt her own life was coming to an end, she suddenly saw that someone had placed a door to the outside. This was the good work of Emma, refurbishing the house before moving.

Hanna relived again when she was almost about to die. She moved along with Harry, Jacob, Emma, Cemre and Layla to a big mansion in Moonlight Falls.

She was first confronted with the ghost of Bob when they had just moved into the new house. It was a very emotional re-encounter. As Hanna was old and had nothing to lose, she forgave Bob and asked him for his son Jacob's hand. Afterwards, Bob and Hanna even made out, which turned into a fairly awkward situation. After this first re-encounter, they decided to stand off for a while, until they would meet each other in the Empire of Death.

Hanna reached the incredible age of 109 days. She even saw her own son Harry growing into an elder. She spent her last days helping to raise the little Charles and listening to the beautiful music of Layla. Her family was devastated when they saw Hanna passing away, but she knew she had an impressive life.

Life Leading Up In The Sims 2 Edit

Hanna Finch (née Olsen) is an adult woman created by Sophic2 who lived in the cellar of Bob Zorgeloos's home.

Hanna graduated from college at the same time as Bob. From the moment they saw each other, they fell deeply in love. They kissed, fell in love, and WooHooed. Hanna thought they were the most perfect couple of the world, but as they both share the Romance Aspiration, they didn't have any wedding plans. But one day, when she came home from work, she saw Bob, in the arms of another woman, called Debbie.

When she found out Bob cheated on her, she was locked into the cellar. Not much later, Mary joined her. They both found out that they were pregnant with Bob. While living together, their relationship kept on growing, and finally they engaged and joined union. They raised the kids, Michael and Jessica as well as they could, but unfortunately, Mary was the first one who failed surviving in Bob's cellar.

Hanna tries to do what she can to raise the kids, who are now children. The fact that they never have seen daylight so far and that they can't go to school can make live very hard for them.

As Michael and Jessica never went to school while they were locked in the cellar, they were taken away by the social worker. Hanna was devastated that she had to see her child being taken away, and her only memory of her ex-wife, his son Michael. As she was alone in the cellar, she had nothing to live for. She had some visits of the Social Bunny from time to time, but it didn't stop her sadness.

She used to work in the Culinary Career Track and she made it to level 3: Fast Food Shift Manager, but she got fired when she didn't show up right after she was locked into the cellar.

The garage of Bob Zorgeloos 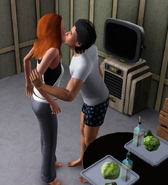 Hanna making out with Bob's ghost 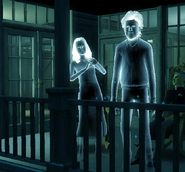 Bob and Hanna, both being ghosts
Add an image to this gallery
Retrieved from "https://sims.fandom.com/wiki/Fanon:Hanna_Olsen?oldid=638807"
Community content is available under CC-BY-SA unless otherwise noted.