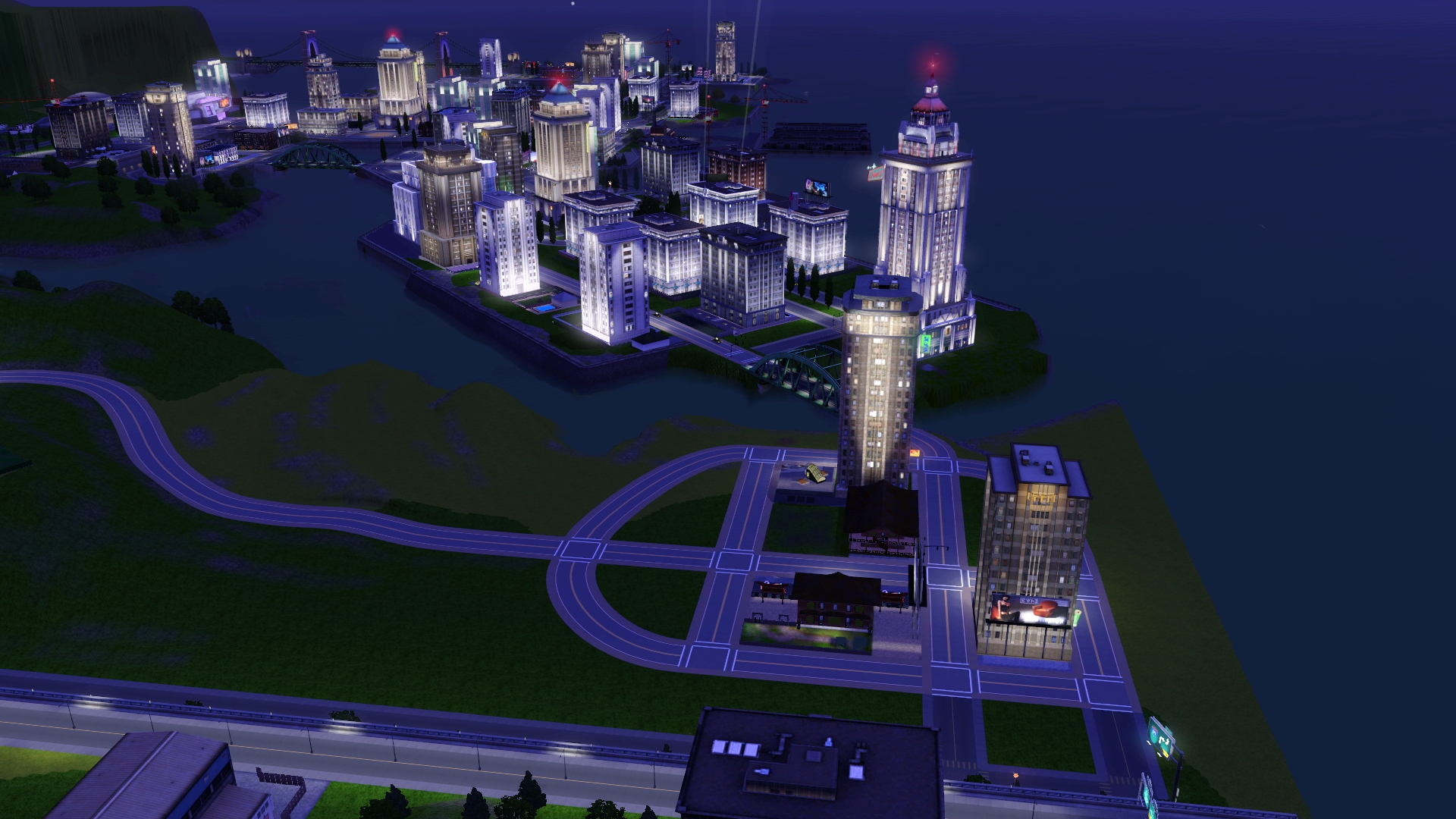 A World Built to Accomodate All Kinds Of Sims!

The City Of Hampshire is a world that focuses on all kinds of gameplay and activites in the sims 3. Hence, the reason to why it is categorized with all packs except The Sims 3: Katy Perry's Sweet Treats.

The Golden Hills District is a neighbourhood designed for the wealthy and famous of the City. It is next to the Hamilton Estate.

Many of Hampshire's occupants are millionaire's due to it's history. Some of the millionaire's do not even live in the Golden Hills District. It is also mentioned in the description that the country in which Hampshire is located in is the Kingdom Of Nairton . It is also mentioned that the country does not have Income tax. This may be a reference To the real life country of Monaco.

The City of Hampshire unlike other worlds is different because it is a Downtown world. This means that it shares the same characteristics as Bridgeport.

The world also has over 100 lots. Hence , the game may lag a liile (depending on the computer used)

The City Of Hampshire is also not like other worlds because most of the rabbit holes are not place on lots. The creator confirmed that this was done to prevent too much lag to the game.

The world also seems to follow an alternate timeline which is set somewhere after the timeline of The Sims 2 . This can be confirmed because an NPC, Nigmos Specter II is the son of Ophelia Specter. There also appears to be many sims and households in this world which are linked to pre-made sims from the Sims Franchise.

The Maloney Family from Bridgeport also appears in this town. It appears that Polly Maloney's family had a business in Hampshire , The Maloney Stock Interchange. So, when she found out abot this she moved to hampshire and started working the business. More info can be found at the fanon maloney family site Fanon:Maloney Family.

Hampshire is also not like other worlds because at the start of the game several families appear to own businesses and properties across the world. This is usually not seen in other worlds. The creator has confirmed that this is actually how the game is supposed to startup.

The world also contains "NPC Families". These are families of npc sims. For instance, if the "Reslot All Slotted Sims" option is chosen for the building that Precilla Vanderburg lives in, she, her husband and son will be transfered to the same buiding and not scatered across the city. This is because they exist in the game codes as a household.

§550,000
Difficulty: 1
Luther Erwin
Luther is amongst the spawns of Claire that remain hidden in Hampshire. He's taken fancy to the old storage area in this particullar building.

§95,000,000
Difficulty: 1
Howard Hamilton III
Founded in 1777, The Hamilton's have been around for over 200 years now. As the years have gone by, the family has become richer than ever! What you are seeing is a small portion of the Dynasty's wealth. They are so rich and powerful that they stand above the Landgraab's and the Alto's. Their power and success became greater when the females in the family were married of to more wealthy successful families (example: The Vanderburg's , etc.). However, with a new and young leader , will this "Dynasty" see a bright future?

§15,500,000
Difficulty: 1
Claire Valimore
Claire has been around longer than some Sims can say they've been. She's made more riches and more vampires than her old enemy, Elvira Slayer

§5,355,000
Difficulty: 1
Olivia Pope
Naive people will have you believe that you have to work to become a politician. However, Olivia can tell you that that isn't the case. She made her way into riches and fortune through romantic relationships with politicians.

Matilda has always had the dream of becoming a world renowned journalist. So, when she won the lottery, she started making her dreams a reality. But, with all this working will she find time for life?

After the final season of Hot in Hampshire ended, the ladies didn't have much to do. They obviously still fight and throw dramas. So, they decided to continue their careers and achieve their dreams! Hopefully their new found fame helps them in their efforts!

§35,250,000
Difficulty: 2
Alisha Allen, Kevin Allen
Alisha and Kevin met at a dance club in the city. One was an acrobat rising to fame and the other was an art appraiser. Kevin soon proposed to Alisha. ( they had known eachother for a year) However, soon after she moved in she found out that Kevin had been cheating on her! But, she didn't seem to mind since she too was cheating on him. The 2 now know about eachother's mistresses and seem to be OK with it.....

§10,095,000
Difficulty: 2
Danita Hamilton, Joseph Hamilton
When Joseph wasn't handed the fortune, his ego got the better of him and caused him to set a rift between him and his son. Will Howard ever forgive his father? Will Danita stop siding her husband and side her son? Or will things go south?

§8,345,000
Difficulty: 2
Jeanie Wallton, [[Fanon: ]]
After Jeanie's recent promotion and fame gain, her husband has been feeling jealous and egoistic. Will her fame drive them apart?

85,000,000
Difficulty: 3
Chanel Montgomery,Libby Putney,Suzanne Swenson
"Good day Idiot Hookers, I am Chanel Montgomery, are you one of those pathetic fatty's or ethics that think you should be cool? Well then, you've met the right group of people. These are my idiotic manatee brained minions, Chanel #2(Suzanne Swenson) and Chanel #4(Libby Putney) . We'll teach you b**ches how to be blonde, thin and hot like us so that you don't end up in the make a wish foundation for ugly fatties and dumb disgusting ethnics. However, you b**ches will go through rigorous training.. Let's hope you poor middle class idiots can learn something... And In case you didn't know my daddy is super rich, which means that I am (Just in case your idiotic manatee brains didn't get that). This also means that I can sue you lousy a**es if you don't impress me! So, you better work B**CHES!"

INFORMATION: This world is NOT AVAILABLE FOR DOWNLOAD at this time.

Retrieved from "https://sims.fandom.com/wiki/Fanon:Hampshire?oldid=903213"
Community content is available under CC-BY-SA unless otherwise noted.