Goopy Letourneau (né Gilscarbo) is a well known resident in my player stories in The Sims 2 in Pleasantview. He is the son of Eduardo and Carlotta Gilscarbo, the husband of Brandi Letourneau, and the father of Joseph Letourneau, and identical twins Ryker and Jaleb Letourneau. Goopy started off as a regular Pleasantview Townie, who quickly rose to prominence as a main character for my player stories. He had already risen to prominence by appearing in the The Sims 2 console in Tranquility Falls, and in the downloadable Sims 3 neighbourhood Monte Vista. Goopy is voiced by Stephen Kearin and is 29 days from being an Elder.

Goopy made his first appearance at a memorial park where he met my CAS Sim Bunny Leishman, and Darren Goth. His future roommate Marisa Bendett passed by the memorial park but she and Goopy did not meet. This is probably where Darren and Goopy became friends, because I certainly didn't make them friends and then the next thing I knew, when checking Darren's relationships panel, that he and Goopy were friends. Though he could have made friends with Darren via the Telephone. Goopy would also become friends with Bunny Leishman.

Darren and Goopy found it difficult to maintain their friendship due to their contrasting differences but they managed to keep it eventually. Goopy became one of the guests at one of Darren's numerous house parties. The other two Sims that attended the same party as him were Nina Caliente, and my CAS Jestyn Leishman. Even though Goopy and Jestyn became best friends, Goopy would lose a fight with Jestyn at some point - possibly a friendly fight. Jestyn's soon to be wife Bunny Leishman tried to initiate some romantic gestures with Goopy - which he didn't accept - as a backup incase her romance with Jestyn went stale. Despite this, Goopy certainly had the best chance at becoming Bunny's husband besides Jestyn.

Several days later Goopy got married to fellow townie Brandi Letourneau. They moved into a house together, along with their roommate Marisa Bendett. The couple had three children together - Joseph Letourneau, and twins Ryker and Jaleb Letourneau. I actually impregnated Brandi with her own genetics to produce Ryker and Jaleb, much the same way Brandi Broke had had Skip-Junior Broke a few months earlier. So before I got SimPE, the game did not recognise Goopy as the father to Ryker and Jaleb. It should be noted that Goopy's son Joseph got Abducted by Aliens at some point, and Goopy and Brandi both received a positive Memory from this. Goopy got negative memories from engagement and Marriage to Brandi, as he was still a romance Sim at that time. 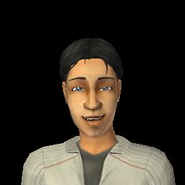 Goopy's son Joseph.
Add an image to this gallery

Retrieved from "https://sims.fandom.com/wiki/Fanon:Goopy_Letourneau_(Gilscarbo)?oldid=887878"
Community content is available under CC-BY-SA unless otherwise noted.