The Sims Wiki
Register
Don't have an account?
Sign In
Advertisement
in: Fanon created and owned by WayfinderOwl, Paused fanon, Sims (fanon),
and 21 more

Georgina is the biological daughter of Alexander and Jenna Goth, granddaughter of Mortimer and Bella Goth, niece of Cassandra Goth and Adrian Gardener, sister of Edgar Goth, cousin of Aria Goth, cousin once removed of Helena Goth, aunt of Dexter Goth and Xavier Goth.

She was raised as Cassandra and Adrian's daughter, until Edgar told her the truth in her childhood.

Georgina wears mostly blacks and greys. Her clothes have a more torn effect.

Georgina was unaware of everything going in on the house. Adrian cared for her and doted on her. She was given a mummy scary bear from her adoptive mother, Cassandra. Something confused her, when a man kept lifting her out of her crib from time to time to hug her.

Adrian spent a lot of time with her, reading to her and teaching her. Sometimes her "uncle" Alexander would play with her.

One night, Georgina heard a lot of screaming. She walked into her "sister" Aria's room, and saw a very small sim in a grib. Georgina was obsessed with the small little girl, and crawled into the room every day, to play with her toy bear near the crib.

She did not understand what was going on, when Adrian passed away. Suddenly he was not around anymore. His ghost visited her the following night, making her happy that he was not gone forever.

Georgina was skeptical about starting school. She hated leaving the house, and her clumsiness would make her a joke to others. She confided this to her brother, who had always been honest with her. Edgar told her the truth, that he was her brother, and who her parents really were. He told her that she did not have to worry, she will find friends in school who like her for who she is.

After her first day of school, she realised her brother was right. She had made friends with a girl in her class. Georgina waited for her brother to come home, so she could tell him, but he did not come home. When Edgar did come home, Georgina was the first person he told, that he had met a woman and married her. Georgina liked Maria very much.

While Georgina was in the kitchen, she noticed one of the elixirs on the cabinet. She could not help herself. She just had to drink one. The elixir itself made her more lupine than the average sim.

At the funeral of Cassandra, Georgina was very respectful. A part of her was releaved, because her parents would not keep up the act, that they were her aunt and uncle any more. She would have stayed, but the sun was setting and it would be difficult to hide her curse from her family.

Georgina was happy when Helena was finally old enough to go to school. Since they were always close, it made sense that they spent all of their nonclass time together.

Georgina was the first person Edgar told, about Maria's pregnancy. She was excited at the thought of being an aunt. However, after Dexter was born, his constant crying and neediness might have been what put her off children.

Deciding to be gloomy and miserable, Georgina started high school determined not to make any friends. Georgina liked to be alone, away from people. Often she found refuge in the family graveyard, reading a book on the bench. She still tried to honor the dead, by leaving a lit candle in the center of the graveyard.

While Georgina was sat at the kitchen table doing her homework, she saw her mother enter. She saw everything. Her mother's ghost leave her body, even Grim Reaper collecting her soul. It drove her mad.

Helena tried to comfort her, and helped her plant flowers on Jenna's grave. Georgina felt that one candle was not enough. She went to the store and brought thirty candles. Each one she lit, creating a candle lit line along the path from the graveyard, back to the front door.

Georgina was unaware of Xavier's birth. She thought he was a ghost, torturing her with his crying. When Alexander passed away, Georgina took Helena to the store to buy more candles. More than the last time. The two girls lined each pathway in the whole Goth estate with them to pay tribute to her father. Once they were done, she told Helena what had happened.

She was present at the funeral, and said her goodbyes to her father.

Georgina grew into young adulthood. She barely knew what to do with herself. The more younger members of the family were getting older, to her joy. She never was one for all that baby talk and such. Eventually she plans on getting a job. Until then, she plans on studying cooking. 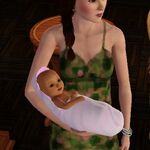 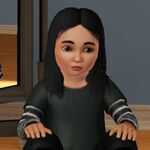 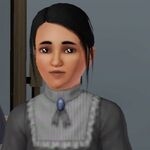 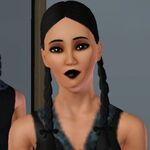