George Glenn is a Sim who resides in Riverview.

He was born with the traits Genius and Loner. He learned all three toddler skills successfully. His grandma died when he was a toddler but he doesn't remember her very well. He remembers being upset at her funeral.

He gained the trait Bookworm as a child. His favorite activities are reading books, playing chess, and discovering potions with his science lab. He also liked dressing up as an astronaut and pretending to trek the moon. Some of his childhood dreams are to become a doctor or a scientist when he grows up. He finished school with an A, and made it on the honor roll!

He gained the trait Athletic as a teen. He gained 1000 Simoleons in scholarship money when he took the University aptitude test as a teen, because he had level 5 logic skill when he aged up, and plans on increasing his possibilities for scholarships before he graduates. He also began liking working out, especially with his father. He joined the sports club after school. During this time, his older sister Grace was going through a lot of problems after her boyfriend Bryce died and he would always console her. He was supportive of her new boyfriend, Greg, but felt a little suspicious about him. His nieces Michelle and Susie were born but he never really got to know them as he was super busy with school work, and sports club after school. George finished High School with an A.

As a Young Adult, he gained the Green Thumb trait. He soon went off to university and spent his first two terms in the Urele-Oresha-Cham Fraternity. His last term he rented a small house. He did great in university and passed his exams with flying colors. While there, he also met his best friend Matthew Tellmer. He created an online dating profile and met Hanna Germanotta. At first they just hooked up and just WooHooed and were friends with benefits but they ended up having feelings for each other and went steady. He ended up graduating with a pefect GPA and geting a Science and Medicine degree. He also had level 10 logic and level 9 athletic and was close to fulfilling his lifetime wish.

The night after he moved back, he was abducted by aliens. That day, he decided he wanted to become a scientist instead of a doctor like his father. When his parents both aged to Elders, Grace moved out with Greg and her children to a new house so Gloria and Gordon could enjoy their retirement. George moved in as well to help her pay rent, he slept on a Murphy bed as there were only two bedrooms. There he mastered the athletic skill and fulfilled his lifetime wish. He also got a job in the Scientist career and was hired at level 4 due to his college experience.

When Gary left after his break up with Grace, George moved his bed and dresser into Grace's bedroom, and would console her when she was sad about her break up, and also to help lift her spirits during the case over who would get custody over Susie. After Grace got married to Arthur, George moved to his own house.

George and Gloria play chess together.

Gordon and George work out together.

George off to University! 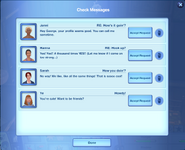 George hooking up with Hanna.

George bones up on anatomy.

George studies on his laptop.

George and his best friend.

George at a lecture.

Getting a perfect GPA!

At uni graduation with Grace.

Getting abducted by aliens.

After getting abducted.
Add an image to this gallery
Retrieved from "https://sims.fandom.com/wiki/Fanon:George_Glenn?oldid=894892"
Community content is available under CC-BY-SA unless otherwise noted.