Genesis Curious (née Lam) is the ex-fiancée of Drew Curious. Due her engagement she discovered that she was pregnant, so she changed her name already in to Curious.

Genesis was the maid of the Curious family for two whole generations. She saw Drew growing up, but they didn't see each other for years when Drew and his parents moved out of the Curious household.

When Drew came back he was all grown up and Genesis got the biggest crush on him. Drew, not being the biggest casanova ever despite his aspiration, was flattered and they soon got a serious relationship. It didn't take long before Genesis moved in.

When they shared their first WooHoo Genesis soon discovered that she was pregnant. Drew and Genesis were both scared by this idea, both not sure if parenthood was the right thing for them. However the baby turned out to be born prematurely and didn't survive. Genesis and Drew named her True Curious, referring to the fact that she was too curious to wait until she was ready to be born.

Genesis discovers that the love of her life Drew cheated on her with the new maid Aiyana Dallas and is shocked. She abruptly breaks off the engagement but refuses to move out and stays in the Curious household.

When Genesis turns into an elder she loses her tiara and she suspects Aiyana of stealing it. However she can't prove this. She feels awful without it but still refuses to leave the Curious household and the twin girls Ana and Emma, who in the mean time turned into teens. But not much later she understands that it's time to let go and together with the other elders of the third generation she moves out of the Curious household so the children can start their own families.

She is closely involved with the marriage of both Ana and Emma and also the one who supports them in their wish of getting children. She is extremely saddened with the death of Drew as she never stopped loving him, but she doesn't allow herself to let anyone know this. She collapses after the death of Aiyana and spends the most of her last days alone in her room. She dies right before Kevin, Ana's son, turns into a child. 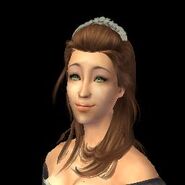 Genesis as an adult. 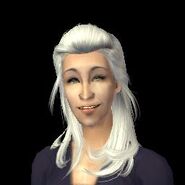 Genesis as an elder.
Add an image to this gallery
Retrieved from "https://sims.fandom.com/wiki/Fanon:Genesis_Curious?oldid=743017"
Community content is available under CC-BY-SA unless otherwise noted.