Fanon article ownership
This fanon page was created and is owned by Breira (talk). Unless the edit is constructive and/or minor (such as fixing a template), please do not edit this page unless given permission from the author.

Gavin Sword is the first-born son of Corvia and Cyclone Sword, husband of Sonia Sword and father of two, Gale Goth and Sunday Sword.

Gavin is the good guy in his family. He got A+ all the time, he never said a bad thing to his parents, he married the girl next door, his first and probably last love, Sonia Sword.

He got his dream job at the hospital, now he is a wealthy man, living with his wife in the Goth Manor. How is this possible? Well, Sonia is the daughter of Gunther and Cornelia Goth, the hidden child (somewhy her parents wanted to keep her existence in secret), and because Mortimer, Sonia's brother moved to his wife's place, Sonia inherited the Goth Manor.

Gavin and Sonia have two children: Gale, and Sunday.

When Gale moved to Monte Vista with his wife, Leticia, and Sunday left the family nest too, some weird creatures visited the Goth Manor. They were talking about revenge, something that the Goths have done to them back in the past. No one knows who they were, or who were they actually looking for, but they found a pureblood Goth and her husband so they transformed the couple into half dead, half alive, blood sucking monsters. They became vampires. (If you are wondering about Sonia's brother, Mortimer, and his wife, the creatures found them too. But somewhy they did not transformed them, but after that night no one saw Bella again... Never ever ever. Like ever.)

Gavin with his brother, Richie

Gavin and Sonia on their wedding 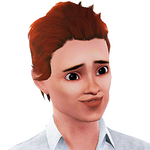 Teenage Gavin
Add an image to this gallery
Retrieved from "https://sims.fandom.com/wiki/Fanon:Gavin_Sword?oldid=738264"
Community content is available under CC-BY-SA unless otherwise noted.