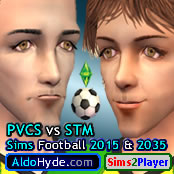 PVCS vs STM is a Sims football/soccer-themed screenshot story series written by AldoHyde and Sims2Player.

It is an ambitious and unusual Sims 2 neighborhood crossover tale, featuring the pre-made Sims (and their descendants) of Veronaville, Strangetown and Pleasantview playing 90-minute football matches.

The story tends to focus on the Veronaville Feud, while parodying the other base game story scenarios from the other two neighborhoods too. How will the base game storylines and conflicts manifest themselves on the soccer pitch?

“Round 2” is the 2035 Match (STM vs PVCS) — 20 years later, when the pre-made Elders are dead, and new descendants take their parents’ places in the teams.

This series depicts the Capps and Montys going to “war” in an Alternate Universe to the “Main StrangeTown Monty” (STM) Machinima Series, where the Veronaville Disaster did not happen.

The actual matches are written in “Live Update Parody”, with dialogue from sports commentators and between the players on the pitch, with occasional insight into the characters’ thoughts.

Both teams also contain some female players: Pre-made female Sims who are perceived as more likely to play football. As AldoHyde is involved, certain characters may also take on some of their STM characteristics.

How will Don Lothario fare as a Defender?
General Buzz Grunt as a Goalkeeper?
Patrizio Monty & Consort Capp as Rival Managers?

The 2015 Match relies on the reader's background knowledge of the premade storylines of Veronaville, Strangetown and Pleasantview.

Being familiar with the Main STM Machinima Series also helps, as the 2015 Match is a simple parody of the Main STM Series.

Is the aggression on the pitch limited to the Veronaville Feuding Families?
Where does Kent Capp’s allegiance lie?

See you at the Llama Memorial Stadium. Don’t be late!

How will Dina Caliente's son fare in goal?
Will the grown-up Curious alien babies excel in football as they do in science?
Will the new Managers behave differently from their 2015 counterparts, and lead their teams to glory... against all odds?

The 2035 Match is a full-fledged Alternate Universe to the Main STM Machinima Series. It is also more Capp-centric than the latter. To what extent do these two similar universes overlap with each other?

The 2035 Match contains some chapters that are less football intensive than the others, as those are background stories for the new / updated characters.

Chapters which are more football intensive may also contain a significant amount of Sim-focused player/manager dialogues and thoughts.

If you can't access the chapter links while at school / work, try again later at home.

Readers who have completed reading both matches may also attempt the PVCS vs STM 2015 & 2035 QUIZ.

Retrieved from "https://sims.fandom.com/wiki/Fanon:GOAL!!_Sims_Football/Soccer_Match:_PVCS_vs_STM?oldid=773158"
Community content is available under CC-BY-SA unless otherwise noted.