Fricorith Space (née Tricou) is the husband of Kylie and the father of Quinn and Barney. He died a long time ago but was resurrected along with his family. He died when he was trying to catch a criminal and got shot in the process. He is considered a hero to his grandchildren.

Before he met Kylie, Fricorith died and was buried in the house of the fallen trees along with his cousin and a woman named Rainelle Neegia. Many families lived here after their Fricorith's death including Atta's mother, Alina when she was a child before she moved to an even bigger house. Sometime, somebody moved into the house and they had a resurrect-o-nomitron. They resurrected the Tricou family and then left promptly. Fricorith was thrilled to have a second chance at life and was determined to make the most of it. Him and his cousin changed their appearance and went to college.

As a young adult, Fricorith moved into a residence with Frances, Cara and Kylie. He as immediately attracted to Kylie due to her beautiful green skin. So was Frances but nobody even noticed. Within a week of them moving into the residence Fricorith and Kylie were dating. This made Frances really annoyed but he kept his cool and went out with Cara instead. Kylie and Frances woohooed and got engaged in sophomore year. The rest of college was uneventful except for Cara and Frances getting engaged in senior year. They graduated happy and fulfilled.

As an adult, Fricorith married Kylie and they went on their honeymoon where Kylie got pregnant. Kylie and Fricorith prepared fro one baby but got a shock when there were two babies instead! They adjusted though and had a great life as a family. Frances and Cara also had a child Debbie despite the fact that he still loved Kylie. Fricorith had to go back to work so Kylie looked after the kids but in the evenings Fricorith took charge while Kylie had a rest. He was mainly responsible for making a scrapbook recording the twins toddlerhood. Life went pretty well after that. Around the time the twins were teens, Kylie got pregnant again with Niall. Fricorith was surprised and happy at this and was happy when little Niall was born. Fricorith was worried about his wife, though. She was so tired after Amin died and she would cry at night when she thought he was asleep. Fricorith tried to help her but she seemed sad all the time and he didn't know how to react. One day, Kylie's mother died too. Fricorith's parents had died a long time ago as they hadn't been resurrected so he was used to it but Kylie wasn't. Then Nancy and Allen moved in and life became harder for them all. Fricorith found life quite hard from then on, especially when Nancy ran away. His household kept changing, Nancy left, then the twins left, Allen left and Jeanie came. This was causing strain on him and Kylie's perfect family and Fricorith began to wonder if their relationship really would pass the test of time... Fricorith had the biggest case of his life. The police had a lead on a bank robber they'd been tracking for ages. At the scene, Fricorith jumped out and said 'Hand's up' to the robber. The robber didn't though. He shot and Fricorith was killed instantly. 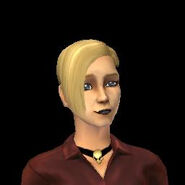 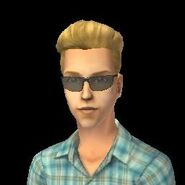 Fricorith Space as an (Young) Adult.
Add an image to this gallery
Retrieved from "https://sims.fandom.com/wiki/Fanon:Fricorith_Space?oldid=744770"
Community content is available under CC-BY-SA unless otherwise noted.