Vargheim timeline
This member of the Vargheim clan is of both timelines.

Francesca St-Louis-de-Martine is a child living in Howlgard with her best friend Bryan Vargheim and his family in The Sims 3, or in Willow Creek with Bryan in The Sims 4. She was Bryan's imaginary friend, and was transformed into a real Sim when Bryan offered a Metamorphium potion to her. When the two grew up, they married and moved to Willow Creek where they had two children, Charlie and Jean.

Francesca started life as a small, inanimate toy belonging to the young Bryan Vargheim. He would constantly play with her and started to build a bond with her. Little did he know what that meant to the little doll.

When Bryan aged up into a child, Francesca came to life for the first time as an imaginary friend visible only to Bryan. Once Bryan got his first chemistry set, he eagerly went to work attempting to discover a formula that would make Francesca real, as he had become frustrated with being laughed at for having Francesca as an imaginary friend. It didn't take him long to find it, and before she knew it, Francesca was a living, breathing girl.

She was overjoyed. She and Bryan became inseparable. People constantly speculated about the "little girl that came from nowhere." But that didn't bother her. By the time she and Bryan became teens, they had built such a friendship that several months later they had fallen in love.

Life before and during The Sims 2[edit | edit source]

Thirteen years before Francesca first appears in The Sims 2, she, Bryan and Bryan's older brother, Ryan, decided to move together to Pleasantview. Here, she and Bryan got married and settled down with Ryan in a small house they purchased. It wasn't long before Francesca became pregnant with her first child. Nolan was born nine months later.

Soon after moving into a bigger house to accommodate children, Francesca gave birth to her second child, Siena. A few years after that, Hudson followed. By this time, Nolan and Siena had both learned all their toddler skills and had grown into children. Hudson shared the same treatment, and grew up well. The family celebrated this by going on vacation to Takemizu Village, Japan. They returned three days later, when Francesca decided to create more income by establishing a business. Fran's Outdoor Goods opened a few months later.

A few years later, Nolan, Siena and Hudson, now all teenagers, were all accepted into SimCity Academy. Around the same time, Francesca gave birth to her fourth child, Anneliese. She is quite happy about how her life is progressing thus far, and is hopeful for the future.

Imaginary-friend-turned-writer Francesca is now living the okay-but-happy life with Bryan, her lifelong friend. Having newly discovered a talent for cooking, she is happy to whip up the three square meals a day that her husband and children need to stay alive and well. 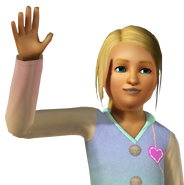 Francesca as a child. 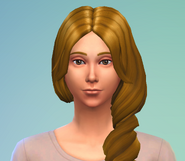 Francesca as an adult in the alternate timeline.
Add an image to this gallery
Retrieved from "https://sims.fandom.com/wiki/Fanon:Francesca_St-Louis-de-Martine?oldid=702165"
Community content is available under CC-BY-SA unless otherwise noted.