Fiona Hall is a sim created by Nia Toadstool. She is a main character of Stuck In Sims 3. She is 14 years old.

She was introduced in chapter 3.

When Nia created her, she was a toddler with the traits Brave and Charismatic. She would cry so much and keep everyone up at night. Fed up with the whiny toddler, Nia bought a cake and prematurely aged her up into a child and she got the trait Rebellious. Nia did not know that aging up a toddler without teaching them the three toddler skills would cause Fiona to get a bad trait. After her birthday into a child, Fiona would be mean to everyone and refused to do her homework, causing her to get another bad trait when she aged up, Rebellious.

Nia went on the bus with Maverick and Fiona. Later, she invited Nia to hang out VJ Alvi and herself. She went off to get food but later came back and VJ had left due to a family emergency.

She is rebellious, and very rude to other people who aren't a bad girl like her. Some think she doesn't even have a sensitive side to herself, but she does it just doesn't show very often. She is very brave and will take risks without even thinking about the consequences. She is also charismatic and tends to make lots of friends at school.

Maverick is Fiona's brother. They don't get along too well, being complete opposites. She thinks he's a dorky loser.

She does not like Blair that much either. She finds him annoying and pesky. 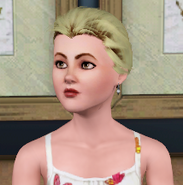 The siblings don't get along very well. 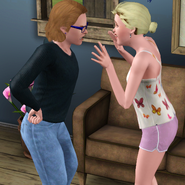 Maverick and Fiona in an argument.
Add an image to this gallery

Retrieved from "https://sims.fandom.com/wiki/Fanon:Fiona_Hall?oldid=711462"
Community content is available under CC-BY-SA unless otherwise noted.