Erika Wolfurt is a supporting character of After Sims 3. She lives in California. She is 14 years old and is a freshman/9th grader at Watersman High School.

She was bullied in her childhood. She is an introvert. Erika rarely ever talks, so not much is known about her so far. She made her debut in After Sims 3, during Chapter 2. She will make an appearance in Helping Out. Also, even though she doesn't have any friends, she feels happy when she's around Hunter Jamie, the daredevil of Watersman High School.

She wears a beanie that's cheetah striped. She has, black short hair and dark skin. She wears mostly black clothing. She is of Mexican heritage and speak fluent Spanish and English. Her parents aren't very nice to her.

She doesn't try very hard at most classes in school, but always has an A in Spanish class. She loves watching anime and draws anime a lot in her sketchbook. She isn't brave enough to post it online however. She is "good friends" with Jill, but Jill doesn't always listen to Erika.

Her parents are Gustavo and Rosalinda who come from Mexico in the 90s. They aren't nice to her and favors her sister Rita. Rita and Erika are friendly and Rita helped Erika through some tough times.

She is in the group getting a tour of the high school on orientation day at Watersman High School. She, along with Nia, Lexi, Ethan, Gregory, Jill Charlene, Hunter, and Principal Sykora. During lunch, Jill and Erika had a conversation. 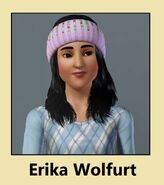 Erika in the seventh grade. (Before her goth phase) 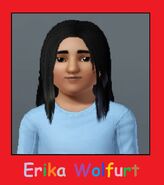 Erika in the elementary school.
Add an image to this gallery
Retrieved from "https://sims.fandom.com/wiki/Fanon:Erika_Wolfurt?oldid=708947"
Community content is available under CC-BY-SA unless otherwise noted.