Emma Wilde (née Zorgeloos) is the ninth child of Bob Zorgeloos and his first child with Jamie Zorgeloos.

Jamie always took good care of Emma, as she got plenty of days off from work. She was learnt to talk, walk and was potty trained. As she saw the ghosts appearing by nighttime, she started to develop a big interest in the supernatural.

As she was born with the Athletic trait, she was pushed by her father to attend the Dribbledine Sports Academy. She really hated boarding school. The day before she grew up into a teen, she has luckily been removed from the academy by her father.

When she came home from boarding school, she noticed that her parents had a divorce, and she saw her old dad flirting with other women again. She was devastated and her father wasn't with her to console her.

In her spare time, she went to the Vault of Antiquity to research the supernatural.

When she grew up into a teen, she got an alchemy station for her birthday from her dad. She developped the Alchemy skill faster than lightning. During the weekends, she roamed around town to find some gems, insects and plants to mix elixirs. Sometimes, it went wrong: while she was creating a Jar of Discord, she accidentally became toadified. Luckily, she was able to mix a Cure Elixir, so she could be her normal self again.

She also enrolled for Drama Club, to increase her charisma skill.

At school she met a cute boy, Cemre Wilde. They had several dates together and Emma asked him to go to the prom.

She was really talented in alchemy. She started selling her elixirs at the elixir consignement store.

She grew up with the 'Lucky' trait and she joined the Fortune Teller career, as she got a large interest in the supernatural and alchemy.

She went steady with Cemre, who was turned into a werewolf. Cemre, being a firefighter, made her worrying a lot because of his dangerous job. At night, he went hunting to collect ingredients for Emma to use in her elixirs.

The day Cemre proposed her, she saw her father dying by old age, she was sad and joyful at one time. Cemre and Emma had a lovely wedding. As she got a big inheritance from her father, being a criminal mastermind, they decided to become business partners of the bookstore, gypsy caravan and the theatre. They also decided to move to a bigger house. Though, she and Cemre are both not big moneymakers, their inheritance last and they get a lot of profit out of being celebrities.

When they were packing to move, Emma noticed that the garage was never used and that the garage didn't have a gateway. She was surprised that she saw 2 men and an elderly woman were inside. They moved all together to their new house in Moonlight Falls.

Several days later, she gave birth to her first baby, Charles, who is a normal Sim despite Cemre being a werewolf.

She was devastated when the old lady and meanwhile good friend Hanna passed away.

When Emma became an adult, she decided to give herself a make-over. She decided to not longer have pigtails, and she chose a more adult-looking hairstyle and dress.

She moved on in the Fortune Teller career and she joined the Mystic branch, because of her strong interest in alchemy.

Having a rebellious teen as a child, it wasn't always easy to raise Charles to a mature young man.

She lost her husband Cemre in a fire accident at work, as he was a firefighter. She was devastated by the loss. She was eternally faithful to him and it didn't seem she was able to happy again.

She reached the top of the Mystic career branch. She got a purple grow around her that gave her a lot of respect.

She spent her last days by taking care of her grandchildren: Leonard and William, as their parents were both hard workers.

She did have a romantic relationship with Raphael Nugent. They kissed, but soon came clear that Raphael wasn't faithful to the old Emma. Maybe because she was too old and unattractive for him?

Emma had plastic surgery when she was 100 days old. As a result, she got 30 days younger, so she got plenty of time to restart her life. It was a little ironical when her romantic interest Raphael died before Emma died.

Emma quitted her job at the top of the Fortune Teller career and she decided to start a political career.

Emma working out with her father 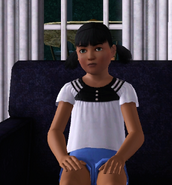 Emma as a child

Emma and Cemre making out at the Spring Fair 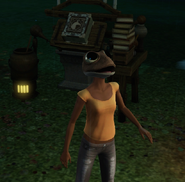 Emma as a teenager
Add an image to this gallery
Retrieved from "https://sims.fandom.com/wiki/Fanon:Emma_Wilde?oldid=901814"
Community content is available under CC-BY-SA unless otherwise noted.