Elsa Gold is the roommate and lover of Roger Space. She was found on the road beside Roger's residence where he found her and took her in. All she wanted is to find out who she was before she appeared at Roger's house. She later found out and her left her current family for her old one.

Before she went missing, Elsa lived in a very close family called the Golds. They got on well and all lived together in one house. The family were the nicest around and they let an orphan called Steven into their family. They didn't adopt but sort of were his surrogate family. Elsa soon began dating Steven and they used to spend hours under the family Willow Tree planning their future together. They were going to marry and finally move out. Elsa would bake cakes in the kitchen while Steven fixed the car. Stereotypical but sweet. However, their plans were cut short when Elsa became obsessed with a married warlock called Angus. She stalked him and as he was short tempered, he tried to kill her but the spell went wrong and he just erased her memories instead. The spell made her vanish in front of his eyes and he swore to finish her off one day. He eventually did but a lot later on in her life. Elsa woke up, not knowing anything about herself.

As a young adult, Elsa was found on Roger's road when he went out to get the mail. He soon discovered that she didn't know who she was or anything about herself so he said she could stay with him. One day, Roger asked Elsa out and she said yes but felt like she was betraying somebody. She felt like this all the time on the date but didn't say anything as she was enjoying Roger's company. That night, Elsa had a dream that she was under a pushing a young girl with black hair on a swing in a house with green walls and a willow tree in the garden. In the morning, Roger asked her if she had remembered something but she lied and said that she was still as clueless as before. Elsa was not truthful to Roger about anything in her past, she knew more than she told him. In her dreams she kept picturing the same girl called Amelia on a swing and she was her sister. There were other people in her dream, a blonde woman, a black haired man and a teenage boy with a red afro. Slowly, Elsa was seeing more from her past. Despite her lies, Elsa enjoyed being with Roger and they both graduated with Magna Cumme Laude.

As an adult, Roger proposed to Elsa and she didn't know what to say, so she asked for more time to think. In that time she just took walks in the park and by the lakes thinking. She still felt a feeling of guilt when she was with Roger. Could that teenage boy in her dream have anything to do with it. Eventually she agreed as part of her wanted to be with Roger. She had an ideal wedding in Twikki Island at Roger's family Villa. She decided to keep her name because it didn't feel right to be Elsa Space. When they came back from their honeymoon (also at the Villa), they bought an apartment together and they decided to adopt rather than have children of their own. They adopted Baby Twins, Alistair and Imogen who were recently orphaned when their parents were killed in a Skiing accident in Three Lakes. Life was great but Elsa felt like she should be somewhere else. One night, Elsa had another dream. In it, she was slow dancing with a boy about her age under a willow tree. It was the same boy who she had seen in her other dream with the red afro. In it she heard herself mutter the name 'Steven'. She was now certain that he was the reason she felt awkward with Roger... When her twins aged to children, Alistair and Imogen decided for their birthday that they wanted to go to an art gallery to see Buttercup Morrison's artworks as they wanted to see if her dreams were real. So, Elsa and Roger took them to the gallery. At the art gallery, Elsa was a little bored as she hated art and believed that Buttercup was just a fraud and her paintings were just of made up people but then one painting caught her eye and suddenly her whole body was filled with shock. She turned and ran out of the art gallery until she was far away to get to grips with what she had just had revealed. From then on, more of Elsa's past kept coming. She found out who her parents were. A lot was coming back to Elsa but one thing remained unanswered, where were they? Elsa neglected everything to search for her family. She found them. They were living in the Kierra District. Elsa went to see them but the moment she opened the door a blonde woman rushed out and hugged her. Soon there were lots of people around her, all of them teary eyed. After one day with them, Elsa felt that she was meant to be here. She called Roger to tell him it was over. Roger was furious, how could she just leave him and the kids? She just replied that she was home and it was over. Roger said if she hung up she would never be allowed to see them again. Elsa hung up. Elsa loved her family life and never looked back. Roger got full custody but she didn't care. She married Steven and took his name. She soon found out she was pregnant and they began preparing for the child. The baby was born and they called her Jill. Elsa didn't bother to tell her other children as she had almost forgotten about them since her custody battle. However, one thing made her remember. She heard from a friend they were calling Audrey mum and this made her angry... She felt strange the next few days, like something was coming for her. She sensed it wasn't human but she didn't care. She tried to tell Steven but he didn't believe her. She was found dead the next morning. Unusually, her skin was almost stone, cold, marble like.

Elsa Gold as a teen. and how she appeared in her dream.

Elsa Gold as a Young Adult. 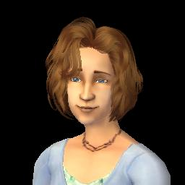 Elsa Gold as an Adult.

The scene from Elsa's dream.

Elsa and Steven in her dream.

The true fate of Elsa Gold...
Add an image to this gallery
Retrieved from "https://sims.fandom.com/wiki/Fanon:Elsa_Love?oldid=638597"
Community content is available under CC-BY-SA unless otherwise noted.