Eloquence Vevina Reaper is the oldest child and daughter of Aricin and Sandi Reaper and the granddaughter of Grim Reaper and Arabella Reaper. She has two younger siblings, Estelle and Melchior Reaper, and a son Alexavier. She has completed her lifetime wish of being Leader of the Free World.

Eloquence was a trouble child from the start. She often tested her parents to see what she could get away with. She was often caught by her grandmother and this caused a rough relationship between the two. Despite this Eloquence got good grades and did well in school. She had only one true friend, Sopia Sellers, whom she shared everything with.

Much to her family's relief, Eloquence had little time to get into trouble between school and a part-time job at the spa. When her mother became pregnant, she openly expressed her dissaproval for her unborn sibling even stating to her mother if they could "send it back". When her sister was born, Eloquence still refused to like her.

During high school Eloquence began dating Darrell Hauser. He was what her dad called "someone he would see at work one day" (her father was a police officer). Eloquence dated him almostly entirely for this reason. One night Eloquence's family was out to a movie and she'd convinced them she needed to stay home to take care of school work. Once they left Eloquence called over Darrell and they ended up Woohooing. A few days later Eloquence discovered she was pregnant with Darrell's child.

Darrell was the first to know about Eloquence's pregnancy. The two stated yelling and ended with Darrell chasing Eloquence away with a baseball bat. She was forced to tell her family. The family was divided in two, whether to keep the child or not. Arabella, Sandi and even little Estelle wanted to keep it. Aricin and Grim wanted it gone. Arabella eventually won them over her compromise. Eloquence gave birth to a little boy, Alexavier Reaper. Eloquence turned her life around and stopped getting into trouble and did her school work in order to keep her son. Arabella called Alexavier her "destiny child". Eloquence graduated school with flying colors.

When Eloquence became an adult, she immediately quit her job at the spa and joined a political career to complete her wish of being Leader of the Free World. She began developing a better relationship with her son but still had little time between work to feed his full need for attention, she did, however, seem to find time to torment her little sister and turn their verbal assaults into physical disputes.

When her parents were found dead, Eloquence acted rather coldly during the whole situation causing Estelle to become suspicious. After her parents were buried, Eloquence received the right to the Reaper estate and fortune. Right after, Eloquence was promoted to Leader of the Free World. Now as head of the household (excluding Grim), Eloquence has made many changes to the way the house is run. Nothing gets into the house without being overseen by her.

Eloquence- The art or manner of speaking and writing fluently 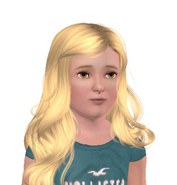 Eloquence as a child 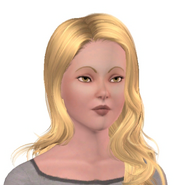 Eloquence as a teen
Add an image to this gallery
Retrieved from "https://sims.fandom.com/wiki/Fanon:Eloquence_Reaper?oldid=638596"
Community content is available under CC-BY-SA unless otherwise noted.