The Sims Wiki
Register
Don't have an account?
Sign In
Advertisement
in: Fanon created and owned by C.Syde65, Completed fanon, Sims (fanon),
and 24 more

Ella Capulet (née Carr) is a playable resident in my player stories in The Sims 2 in Veronaville. She is the daughter of the late Grace Nanale (né Carr), the wife of Albany Capulet, the adoptive mother of Hal and Cody Capulet, and the mother of Joanna Capulet. It remains unknown who Ella's surrogate mother is. Ella is obviously a copy of Bella Goth, but she soon became a Sim in her own right. Ella is voiced by Gerri Lawlor and is 29 days from being an Elder.

I always knew that I'd be pairing Ella up with Albany, but it was just by chance that she made her first appearance walking by the house where Albany and Hal lived. She and Albany quickly became friends and soon fell in love after that. However Albany was still married to his wife Goneril Capp, but there was no question that he wanted to leave her for Ella. After all they were no longer living together and they only kept a contact for the sake of their children. But Albany's chance to break up with Goneril came sooner than expected when Desdemona told him that his wife was having an Affair with another Sim. Albany immediately went over and ended the marriage. Even though Goneril never truly loved Albany, she was still heartbroken when he ended their marriage.

A couple of days later Ella was proposed to by her boyfriend Albany and she accepted. It was during this time that they adopted a daughter named Cody Buckland who had been taken away from her neglecting parents. Interestingly Albany and Cody actually had briefly met at some point before the latter was taken by a Veronaville Social worker. Albany and Ella's wedding was blissfully happy and the four of them had their surnames changed to Capulet while still being under the same tree as the Capp family. Ella became Hal's adoptive mother, so in other words he now had two mothers. A biological mother, and a mother who would otherwise be considered his stepmother.

Goneril has been sworn enemies with Ella ever since the divorce - though the hatred is one sided as Ella's feelings towards Goneril are completely neutral. Regan Capp while not lavishing praise to Albany's new wife stated that she never had a problem with calling Ella "family".

Albany and Ella are employed in the Science career as a Mad Scientist and Field Researcher respectively. They are now quite rich due to the additional funds I gave to all the families of the Sims 2. But now the Capulet's funds are roughly the same as the Goth's. Hal is also employed in the science career while Cody is in the Service career.

Albany, Ella, Hal and Cody now live in a mansion which I'd built to resemble 165 Sim Lane while still there being more than enough subtle differences in shape to tell them apart. I'm not the best at making houses for Sims but I did a very good job. Albany and Ella have had another daughter - Joanna Capulet who is the only biological child to Ella, and the only biological child to them both. Joanna is a Fortune Sim who works in the Business career. The members of the newly established Capulet family lived happily ever after. 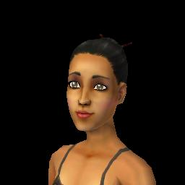