Fanon is complete
This fanon story has been concluded by its creator, or this fanon page is completed and will no longer be edited by the creator. This page is not abandoned, but is not likely to be updated in the future.
Eileen Straight (née Gunderson) is a sim who resided in Sunset Valley with her husband, Rodney, and their three daughters.

Eileen was originally married to Bill Messina before she met Rodney. She had one son from her marriage to Bill, Darrin. Eileen was always a bit promiscuous, having been involved with Christopher Steel while she was married to Bill. They then divorced, citing "irreconcilable differences."

During her relationship with Christopher, Eileen fell pregnant, later giving birth to her second son, Brad.

After awhile, Eileen broke things off with Christopher and soon met a man by the name of Rodney Straight. Eileen didn't that Rodney was a womanizer, unlike the past women he's dated. They were very much in love and soon married at the beach.

Despite hating kids, Eileen had three daughters with Rodney: Kirsten, Dani, and Nadine. Eileen and Rodney still had a relatively stable marriage, despite the stress from their three kids.

Shortly after Nadine's birth, Rodney was tragically electrocuted while repairing the stereo. Eileen sslipped into a deep depression, and drowned herself. With both parents dead, their kids were sent to live with June, Rodney's daughter from a previous marriage. 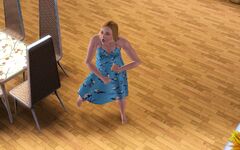 Eileen dancing in her PJs
Add an image to this gallery

Retrieved from "https://sims.fandom.com/wiki/Fanon:Eileen_Straight?oldid=875094"
Community content is available under CC-BY-SA unless otherwise noted.