Edgar is the son of Alexander and Jenna Goth, grandson of Mortimer and Bella Goth, nephew of Cassandra Goth and Adrian Gardener, cousin of Aria Goth, great-nephew of Michael Bachelor, brother of Georgina Goth, cousin once removed of Helena Goth, husband of Maria Goth, father of Dexter Goth and Xavier Goth

In all of Edgar's clothes, he wears a lot of animal prints with black.

Edgar is unaware of all of this. He loves the attention his family gave him, and loves sleeping beside his teddy bear.

Edgar was a very curious baby, that loved playing with all of his toys. Sometimes his father would play with him, or teach him things. He was always happy to learn. For most of the day, his grandmother Bella would take care of him. He liked sitting in the rocking chair with her, while she rocked him to sleep.

He liked listening to his cousin playing the guitar. He clapped and cheered, during the full moon performance Aria set up for the family. All of a sudden everyone was crying, and there was something wrong with his grandmother. She was there, then she looked different and a man in a black cloak took her away.

The next morning, he waited for his grandmother to come to the nursery, to carry him down to the parlour, but she did not come. Jenna, his mother, did instead.

Edgar loved spending time in the attic. He would paint on the easel, or look out at the stars through the telescope on the roof. Being a Goth suited him very much. Deep down a part of him wished his family were a little more 'modern'. He wanted to watch TV like a normal kid.

He tried to talk with his grandfather, but Mortimer was unresponsive and sat in the rocking chair day and night. Edgar couldn't help but worry.

Somedays he enjoyed playing chess in the greenhouse, hoping that someone would join him. He made quite a few friends at school, but was sad when none of them would come back to his house. He saw nothing wrong with living in an old house, with its own graveyard.

Being popular, and having no friends turn up at parties at his house were a strange thing to Edgar, but he got used to it. Not everyone saw the beauty in the gothic life.

Tragedy struck on the Goth household, when his grandfather passed away. In his memory, Edgar continued to paint. Adding more paintings to the collection in the attic, that Mortimer had painted in his lifetime.

One afternoon, Edgar was organising the potions Cassandra had either made herself, or purchased from the elixir store. One fell on him, and since then he has had magical powers. He confided this to his father, who encouraged him to keep it a secret, so he would not be shunned by everyone else in Sunset Valley. A part of him wishes he could be open with it.

Being a witch suited him very much. He spent a lot of his time playing with magic or summoning apples. He had to tell his family about his magic, when a fire broke out in the parlour, and he put it out with an ice spell. They accepted him, but agreed with Alexander that he should not tell anyone in the valley about it.

He started to notice that Jenna was unwell. Edgar studied a little alchemy, to see if he could find a cure for her sickness, but there was nothing.

When Jenna told him that she was pregnant, Edgar was disgusted by knowing that his parents still woohooed at their age. They were almost elders!

The baby was born on his birthday, named Georgina. He hated that they just handed the little girl off to his aunt and uncle.

Right away, Edgar got a job in law enforcement. He wanted to clean the streets of crime and all that. He was tempted to join the military like his father before him, but did not have the drive to work towards being an astronaut like his father. Being the son of an astronaut was good enough for him. Instead, he wanted to follow in the footsteps of his hero and uncle Adrian.

Edgar could not deny that he cared about his new little sister. He would sneak up into the master bedroom, take her out of the crib and snuggle her or give her a bottle if she needed it. He played with her and taught her a couple of things when she grew into a toddler.

His elderly parents were on his case to settle down, but he was too busy with his career to think about that. Besides, doing the whole career thing, then having children never did Aria any harm. Helena is a sweet little girl.

Edgar was devastated when Adrian passed away. He mourned at his uncle's grave, and planted flowers on it. He made a promise to be the best cop he could be.

When Georgina was due to start school, Edgar gave her some advice for school, and told her the truth. She was thrilled to have a brother, and that someone was finally honest with her.

Edgar went out on patrol on one of his days off. He stopped by the elixir store, and found a jar of friendship elixir. The plan was to give it to Georgina so she could use it on a kid at school. Near the bookstore, he saw a beautiful but slightly older sim getting hassled by some guy she was not interested in. Edgar sent the creep on his way. The woman introduced herself as Maria Fair.

She offered to buy him lunch at the bistro as thanks. He slipped her some of the friendship elixir. They spent the day together, going to the park. Going to the beach. Edgar in the spur of the moment said that it would make him a happy man, if he could spend the rest of his life with her. They decided to go for it, and get married right there on the beach. Both of them spent all night on the beach together, before going back to the Goth estate.

As much as Edgar was sad about his aunt's passing, he was more concerned about his sister's behavior. She had changed so much, but also stayed the same. There was also a missing elixir vial. He easily put two and two together.

Maria announced her pregnancy, he was thrilled at the idea of being a father. The first person he told, was his sister Georgina. He cared for his wife, and made sure she had a comfortable happy pregnancy. The baby was born while he was at work. Coming home to find a baby boy in his wife's arms came as a delightful shock to him. They named their son Dexter.

Edgar was devastated at the passing of his mother. He was allowed no time to grieve at all, because Maria immediately whisked him off to their bedroom for a night of woohooing.

When Maria announced her pregnancy, he took care of her. Making sure his wife was comfortable though out the pregnancy, while taking care of Dexter, so she could rest. He was there for the birth this time, and named the baby Xavier.

When he returned from work that day, he found two things; a massive argument between Maria and Aria, and the fact that his father was dead. Edgar tried to calm down the situation, after Maria had told him her side. He thought it would be best for Maria, if Aria did take care of the babies for a while. When all the dust settled, talk over the situation calmly.

Edgar attended the funeral of his father, and said his goodbyes.

Edgar Goth was a changed man, when he was abducted by aliens, while stargazing the night after his father's funeral. Thankfully he did not return with an unexpected surprise. It made him enjoy life more, and spend less time working, and more time with his children. 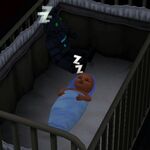 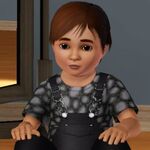 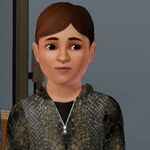 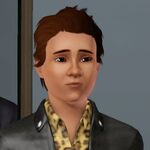 Teen
Add an image to this gallery

Retrieved from "https://sims.fandom.com/wiki/Fanon:Edgar_Goth?oldid=617021"
Community content is available under CC-BY-SA unless otherwise noted.