Dustin Broke is the oldest child of Brandi Broke and her late husband, Skip Broke. He is also the older brother of Beau Broke and Skip Broke II. As a teen, he dated Angela Pleasant, but the two soon broke up after realising they have nothing in common.

After Skip Sr. died in a "suspicious pool ladder accident", the Broke family was left without much money. To help out, Dustin secretly took a job in the Criminal career. His mother eventually found out and begged him to quit, but Dustin refused and continued earning money through suspicious means. Despite his job, Dustin is very sweet and dedicated to his family, often caring for his brothers - reading to them and helping them with their homework. 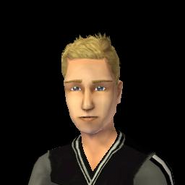 Dustin Broke as a teen.
Add an image to this gallery
Retrieved from "https://sims.fandom.com/wiki/Fanon:Dustin_Broke_(imageneralwheee)?oldid=778628"
Community content is available under CC-BY-SA unless otherwise noted.