Fanon article ownership
This fanon page was created and is owned by Carman39 (talk). Unless the edit is constructive and/or minor (such as fixing a template), please do not edit this page unless given permission from the author.
Dustin Robert Broke was a Sim who attended Academie Le Tour college. He is the eldest son of Brandi and Skip Broke, older brother of Beau Broke and Shane Broke, uncle of Bowie Broke and Audrey Gere, maternal grandson of Bob and Betty Newbie, and paternal grandson of Flat and Flo Broke.

Dustin was raised by a happy but poor family, with his mother Brandi, father Skip, and younger brother Beau. Skip drowned when Dustin was a teen, Beau a toddler, and left Brandi pregnant. The absense of Skip caused Dustin to become rebellious, ignoring his little brother and lashing out at his pregnant widowed mother. Dustin's rebellious and abusive behaviour became so bad that Brandi considered leaving him with distant relatives so she, Beau, and her unborn third son could live in peace. When Brandi's friends Dina and Nina talked some sense into Dustin, he apologised to Brandi and Beau, all in time for Brandi to give birth to Shane Broke. Dustin got a new job in the Medical career, and began dating Angela Pleasant. With Dustin and Brandi's jobs earning them money, the family bought a bigger house. The timing was just right, when Dustin's girlfriend and her disapproving father Daniel came to stay, following the death of their family and the burning of their house. Dustin and Angela grew closer, as he knew what it was like to have a parent die, and soon Daniel died of an illness. When Dustin saw how quickly Angela became friends with his mother and brothers, he was impressed, and decided to someday marry Angela.

Dustin and Angela soon moved to the college town of Academie Le Tour to study. Dustin, still deeply in love with Angela, was taken by how friendly she was to every living in the dorm and began to plan the proposal. Unaware that Angela was planning the same. Eventually, Dustin managed to get the courage to propose to Angela, and she accepted. Excitedly, Dustin and Angela began to plan a life together. Unfortunately, they weren't able to begin their life together. A cheerleader flirted with Angela, and she playfully rejected her, but Dustin misunderstood. Dustin attacked Angela in a fury, causing a horrified Angela to run away to a new house, ending the relationship. That was the last time they saw each other. Losing Angela caused Dustin to go down a downward spiral, eventually refusing to leave his dorm room. He starved to death soon after. Angela had no idea of Dustin's death until she graduated. Dustin's family and Angela soon moved to Belladonna Cove, and Angela moved on with Beau and married him. 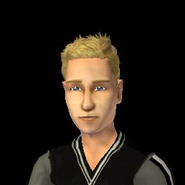 Dustin as a teenager. 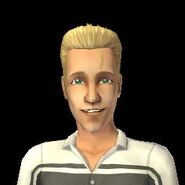 Dustin's father Skip.
Add an image to this gallery
Retrieved from "https://sims.fandom.com/wiki/Fanon:Dustin_Broke_(Carman39)?oldid=746419"
Community content is available under CC-BY-SA unless otherwise noted.