Dustin Broke is a well known resident in my player stories in The Sims 2 in Pleasantview. He is the son of Brandi Broke (née Newbie) and the late Skip Broke, the adopted son of the late Skip Broke and later Stacen Edwards, the elder brother of Beau Broke, the elder half-brother of Skip-Junior Broke and Stacey Edwards, the adoptive elder half-brother of Kate and Amin Edwards, the ex-boyfriend of Angela Pleasant and the boyfriend of Lilith Pleasant. Dustin is 12 days from being an Adult. When he grows into an Adult, he will be voiced by Stephen Kearin.

Dustin presumably made his first appearance in my player stories, at 250 Main Street early in the game, when I was playing as my CAS Bunny Leishman. Brandi Letourneau's Memories state that Dustin was the first Sim she met, before Stacen Edwards who was second. I presume that Brandi Letourneau and Dustin met when Bunny was swimming at the community pool. Dustin and Brandi Letourneau would eventually become friends.

Dustin later appeared outside my CAS Sim Jestyn Leishman's house where he and Dustin met the first time. Dustin became the second Sim to be befriended by Jestyn, the first being Bunny. A few days later Dustin invited Jestyn over to his brother Beau's birthday party along with Angela Pleasant. Before the party began, Angela asked Dustin if he wanted to Sneak Out with her. Despite the risk of being caught, Dustin accepted and they managed to avoid getting caught by the Police. They snuck out a few hours after the party ended.

I initially decided to keep Dustin and Angela together, but after a while my feelings towards their relationship changed. They just didn't seem to be the perfect match, so I decided to break them up and pair them up with Lilith and Dirk Dreamer respectively.

Stacen and Brandi had one child together - a boy named Stacey Edwards, who is Dustin's younger half-brother. 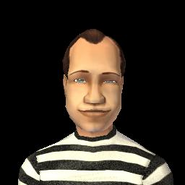 Dustin's friend Gordon.
Add an image to this gallery

Retrieved from "https://sims.fandom.com/wiki/Fanon:Dustin_Broke_(C.Syde)?oldid=818340"
Community content is available under CC-BY-SA unless otherwise noted.