The Doyen Family is a legacy created by DarkSuicune2000. It is pretty long and has two different branches. They have so many different last names because the heir is almost always a girl and the family is patriarchal. This family has been in my game since 2012, so I decided to finally show it off on here.

Have fun exploring the family!

Zebulon and Eunice Harrison hated kids since the beginning. It's no surprise that they had sent their new baby girl up for adoption... Maybe it was for the best...

Beautiful Mary-Anne Sanderson had dreamed of having a little daughter who was well mannered, without going through the troubles of finding a spouse. She always had problems in her love life and she just isn't the flirty type. Mary-Anne was born in 1918 in Roaring Heights. She always grew up under the pressure of her parents who wanted her to marry. All of her siblings were getting married and they felt that she had to follow suit. She always told them that she didn't really want to marry anyone. She really didn't need, nor want a husband. They finally gave in and let her live the life she wanted. So, it really all begins in Roaring Heights, where in 1940, Mary-Anne Sanderson adopted a beautiful baby with blonde hair. Her name was Laura. Laura never had a real father. It was just her and her mommy. They had a beautiful relationship, even if the other, more traditional families questioned it.

When the first day of school hit, Laura was a very 'arts-and-crafts' type of girl. You could see her around almost anything artistic. Around the coloring books, she met new friends, Ernest, Buster and Bessie. They became friends and eventually, Laura and Ernest started dating.

All has been well for the Andresen's. Laura and Ernest have graduated and gotten married! Only one problem... Laura was pregnant with her first children just as the crimes started to appear more often. In fact, one night they were robbed! Laura had enough, so Ernest and Laura moved to the quiet little town, called 'Sunset Valley'. The name of the town was very nice sounding and pleasing. (They moved to town around when Gunther Goth was just born, just thought I'd let ya know) In 1969, Her first daughter Lanaya Reed was born. In 1976, their son Fanon:Gary Andresen was born.

The Andresen Siblings had a horrible sibling rivalry. Gary was mainly the more devious plot-maker. Lanaya on the other hand, was kind and polite to everyone she met, and clearly the favored child. Gary's antics got him in trouble a lot. He egged neighbor's houses, he doorbell ditched and stayed after curfew. Lanaya would often tell her parents of his behavior, which would only strain their relationship more... Eventually Gary grew out of his rebelliousness and just became normal after a while, but their relationship never got better. Gary even gave her a stupid nickname, Lay-Lay.

As a teenager, Lanaya went to restaurants by herself often, reading books as well and trying to escape from Gary. But one day the waiter came up to Lanaya, and said that a man had payed for her dinner. She looked up to see a guy around her age waving to her, his name was Lucas Reed, the son of Eleanor and Harold Reed. Apparently, he had a crush on her at school. Lanaya was flattered and they started talking. It wasn't very long before they became a couple, maybe a few weeks of being friends Lucas was a nice guy with a love for motorcycles. He loved Lanaya's goofy childish side that didn't show very often. They often went to the Papyrus Library and studied together as well. They weren't like the teenage couples of their time-period. They were very focused towards their future and life together.

Soon, Lanaya and Lucas got married, and in 2000 they gave birth to Alexandria Sophia Reed, who went by Lexi. In January 2004 they gave birth to Cole. Then in February 2004, a month after Cole was born, Lucas went off to his motorcycle game. He almost made it up to third place, but he got unlucky and smashed into a tree... 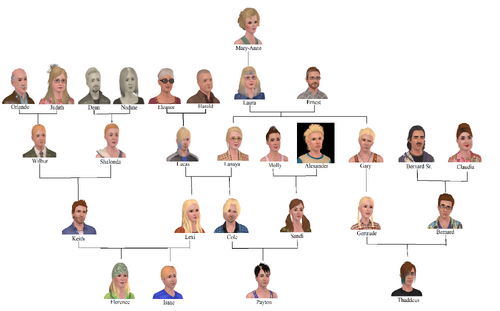 The earliest generation, Mary-Anne and Laura in Roaring Heights.

Isaac hanging out with Florence and Thaddeus.

Isaac and his boyfriend pillow fighting

Lexi meets her grandma as a ghost.
Add an image to this gallery
Retrieved from "https://sims.fandom.com/wiki/Fanon:Doyen_Family?oldid=789207"
Community content is available under CC-BY-SA unless otherwise noted.