The Sims Wiki
Register
Don't have an account?
Sign In
Advertisement
in: Fanon created and owned by Medievalgirl26, Sims (fanon), Male Sims (fanon),
and 20 more

Donald McDooglewurtz is the son of Scats and Sandy McDooglewurtz. David McDooglewurtz is his twin brother. Donald is a International Corporate Lawyer, previously working as a Deep Sea Excavator for a brief time. With his wife Marsha, he has two sets of twins: Daphne and Dylan, and Derrick and Daniel. Donald inherited his mother's blonde hair and thick lips. He has his father's dark blue eyes. Donald loves music. He lives in the same house he was raised in, 46 Bard Boulevard, Veronaville, with Dylan, Derrick, and their wives. He helped raising their children, Daisy and Dominic. 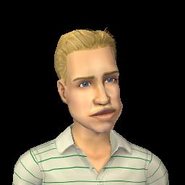 Donald as an adult

Donald and Marsha eating breakfast with their children
Community content is available under CC-BY-SA unless otherwise noted.