Dina Caliente is a main character in the PleasantView machinima series created by CrazeSimGaming.

The premade version of adult Dina Caliente and her twin sister can be found in The Sims 2's Pleasantview neighbourhood. Dina first appeared in the fourth episode of PleasantView titled 'A Friend In Need' which was released on November 30, 2016.

Dina Caliente was born on November 16, 1980, in Strangetown along with her twin sister Nina Caliente. She's the daughter of Flamenco and Nighat Caliente.

During her early years she was raised in Strangetown with her sister Nina. Her mother Nighat Caliente died in 1990 due to unknown reasons, possibly Cancer. After her mother's death she and her family moved to Old Town. In 1996 she met her first love Michael Bachelor at the age of 16. Dina married Michael in 2000 due to his wealth, during their four year marriage she was never faithful to Mike, in fact she cheated on him multiple times.

In 2004 she was pregnant with Mike's child. She then told Mike she wanted to have an abortion due to her not wanting the kid. Michael angrily declined and since then no one ever knew about the unborn child. After the argument between Mike and her, she ran away from home not to be seen by Mike. On the night of September 7, 2004 one week before Bella Goth's disappearance, she attemped to murder Mike in order to get all of his wealth, she burned down his enterprise which killed all of Mike's co-workers except Mike himself which ran out on time. After his death was announced she was let go of all of Mike's wealth and had to move out of Old Town to Pleasantview along with her sister Nina.

On September 14, 2004, she met Don Lothario when moving into her new home, due to the conversation she had with Don about the Goth family including Bella, her grandfather Pollination Technician 7 overheard the talk about Bella Goth which caused him to abduct her later that evening.

She never knew that she is partially an alien hybrid nor she knew that she and her sister were her alien grandfather's test subject's. Her grandfather Nestor Caliente never told her the truth and when he was about to reveal it he died of Old Age in 1991.

In 2005, she fell in love with Don Lothario until his disappearance in 2016. And in 2015, Mortimer Goth and Dina started dating

On October 8, 2016, Dina was getting ready to go on a date with Mortimer where she was expecting him to propose. But moments after, her house exploded in the air from unknown causes. Her fate was never revealed until Season 2, Episode 1.

In Season 1, Dina is introduced as a Bella Goth wannabe. She never told anyone about what truely happened with her ex-husband Michael Bachelor. 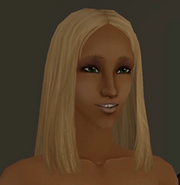 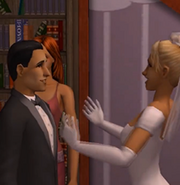 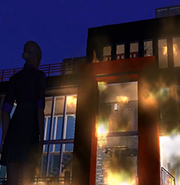 Dina watching Michael's building burn down.
Add an image to this gallery
Retrieved from "https://sims.fandom.com/wiki/Fanon:Dina_Caliente_(PV_CrazeSim)?oldid=768040"
Community content is available under CC-BY-SA unless otherwise noted.