The Sims Wiki
Register
Don't have an account?
Sign In
Advertisement
in: Fanon created and owned by WayfinderOwl, Paused fanon, Sims (fanon),
and 18 more

Dexter is the son of Edgar and Maria Goth, grandson of Alexander and Jenna Goth, nephew of Georgina Goth, cousin once removed of Aria Goth, second cousin of Helena Goth, brother of Xavier Goth.

Dexter's babyhood was extremely uneventful. Maybe getting a teddy bear to snuggle up to was very exciting for him. If he is not wide awake and lapping up the attention from his family, he is fast asleep and snoring away.

Not much happened for him. He was completely unaware of anything going on in the house, even the fact that soon he might become a brother.

Something strange happened. Dexter was taken from his crib by a woman with red hair, and moved to another room. There was something small in another crib close by to the one he was put into.

Dexter became more aware of his surroundings, and more aware of the fact he wasn't happy. He liked his family, he just grew bored with the simplistic toys. He was taught how to walk, talk and go potty by Aria. He was moved into the nursery in the attic, where he could play with all kinds of toys.

He wanted to stay in the nursery that Aria had built, because he would rather share a bedroom with his brother, than Helena and Georgina. Dexter started school. He loved it, because his mind was being challenged.

Dexter took up many new hobbies, to improve his skills, and give him a better chance at getting a good career when he grows up. 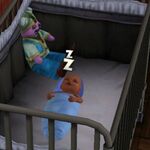 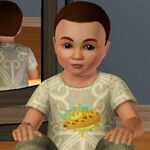