Darren Goth (né Dreamer) is a well known resident in my player stories in The Sims 2 in Pleasantview. He is the son of the late Davis and Delilah Dreamer, the widower of Darleen Dreamer, the husband of Cassandra Goth and the father of Dirk Dreamer and Bella II, Mortimer II, Cornelia II and Darleen Goth. Darren is voiced by Stephen Kearin and is 15 days from being an Elder.

When I first noted that Darren had romantic feelings for Cassandra Goth, I automatically decided that if he wanted another chance at love, he wasn't going to stop until he'd won her affection. It went through a tough climb but finally Cassandra had not only reciprocated Darren's love but she'd agreed to move in with him. However I still hadn't dissolved her engagement to Don Lothario. When Cassandra found out that Don was a womaniser, she left him at the altar, much to Don's horror. Very soon after the wedding failure, Cassandra proposed to Darren and he accepted. The two of them quickly ran into their marriage with a private wedding. It has taken a lot of work to bring them into this relationship but it was worth it.

It came as a surprise when Darren had taken Cassandra's last name, as I was unaware that it is the Sim who proposes (regardless of gender) that gets to keep their family last name. It was rather fortunate though, considering that "Darren Goth" sounds better than "Cassandra Dreamer". Dirk could have had his last name changed to Goth. Although he was happy to be part of the Goth family, Dirk was happier keeping his birth surname.

Darren has influenced Cassandra to improve her painting skills and in return Cassandra influenced Darren to get a non entry level job in the Science career at level three. Darren is finding it hard to make time to spend building skills for his job, improving his painting, and to spend time with his family. But he seems to be doing quite well.

Darren has been best friends with Goopy Letourneau for quite a long time now. After they first became friends, Darren and Goopy found it difficult to make their friendship last - possibly due to their different interests. But they eventually found ways to save their friendship from collapsing. 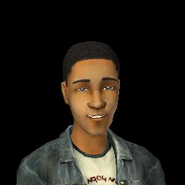 Darren's son Mortimer II.
Add an image to this gallery

Retrieved from "https://sims.fandom.com/wiki/Fanon:Darren_Goth_(Dreamer)?oldid=818342"
Community content is available under CC-BY-SA unless otherwise noted.