Dan Plummer was one of the Original 8 who were abducted, altered, and had all memory from SimNation wiped clean by some unknown entity. Dan was programmed, as you can tell by his last name, to handle all of the plumbing. Who wants to go in the bushes and bathe in the lake all of the time?

Dan had his first grandsons when Jared sired Patrick Gardener and gave birth to Dustin Plummer on 2/2/3. The next day, Drew sired twins, Andrew and Thomas Fisher. On 3/2/3, Timothy sired Chad Harper and Lee Wizard as well as Adam Warlock, while Alex had George Carpenter and Drew had Jacob Taylor. A day later, Jared sired Brad Baker. Then on the following day, Timothy gave birth to Jesse and Nicholas Potter.

As of 1/5/4, Dan died at 51 days old (as counted from his first day in the Genesis Project since he doesn't know how old he was before that time). He has been laid to rest with the other Originals in the Cemetery. 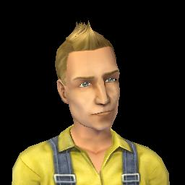 Dan as an adult 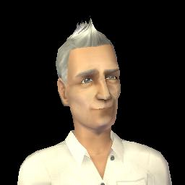 Dan as an elder

Retrieved from "https://sims.fandom.com/wiki/Fanon:Dan_Plummer?oldid=729414"
Community content is available under CC-BY-SA unless otherwise noted.