He is the son of Tim and Lisa Chandler. Like Eileen, he is an only child.

Dalton Jeffery Chandler was born to his parents Tim and Lisa in Pleasantview. Dalton was described as a curious, energetic, and talkative kid.

In high school, Dalton met and fell for Kendra Aubrey, a girl a grade below him. The two shared a strange connection, and had a lot in common. Almost too much. Both of them being carefree lead to them often not taking their relationship issues seriously, including their future. After nearly 3 years of dating, the two broke up when Dalton went to college.

At the start of college, Dalton met Eileen Tinsley and the two soon became fast friends. The pair saw something in each other; Eileen’s somewhat grounded and reserved personality made a good foil to his carefree personality. At a party a few months into freshman year, Dalton and Eileen started dancing. The two wound up kissing and started dating soon after.

Dalton declared the political science major, and college was going good for him. His relationship with Eileen blossomed into love. He made more friends, even joining a frat. One day, Dalton ran into his ex, Kendra. He was overcome with all the memories of their good times together, even though he was with Eileen now. Despite that, the two decided to catch up, rekindling a friendship of sorts. However, Eileen began to grow slightly jealous; the two seemed slightly flirty towards each other, although Dalton never made a move on Kendra. He began to argue with his girlfriend more often, which was out of character for the otherwise happy couple. To the dismay of both, they broke up.

At a frat party, both Eileen and Kendra showed. He gravitated towards Eileen; they never wanted to break up in the first place. But Kendra kept trying to but in, and get his attention. At some point during the party, Kendra, after having one too many cups of juice, tried to kiss Dalton. A now sulking Eileen saw and immediately left, but not before she saw her ex reject it. Upset, she began avoiding him. A few days later, he got a call from her apologizing for avoiding him, for her jealousy towards Kendra, and how she didn't see him reject Kendra. The two decided to be just friends for the time being.

One day, Dalton was out playing pool with some friends in Belladonna Cove. He met and hit it off with Jeanette Shaw. The two had quite a spark, and wound up woohooing on the first date. They continued seeing each other after and began officially dating. Eventually Dalton and Eileen, now both dating other people, decided to have a double date. It was revealed that Jeanette used to be married to Eileen's boyfriend, Mitch. That took a hit to their relationship, but they continued seeing each other. However, Jeanette discovered that Dalton and Eileen used to date, and decided to break up due to all the drama.

During sophomore year, he met and befriended Scott Gaither, a student in one of his classes.

Finals rolled around, and Dalton overslept. He was now on academic probation. But he began spending more time with his frat brother, Zeb. Things soon became flirty. Two months into summer break, they began dating, and Dalton came out as bi. However, he put off telling his parents. He was unsure of his new relationship; he still thought about Eileen from time to time, although they kept each other at a distance ever since his breakup with Jeanette. But he ultimately decided to tell them because he didn't want to hide this part of him. While initially shocked, Tim and Lisa soon came around and were accepting. However, things with Zeb weren't going exactly well. As their relationship progressed, Dalton realized he doesn't want to be with him. The couple had different goals. The two eventually broke up towards the end of junior year. 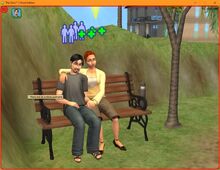 Dalton finally reached senior year. He and Eileen began hanging out again. It was as if they picked up right where they left off - friendship wise at least. Although that spark they had was still there. The two decided to give it another shot. They took things slow and began officially dating once again.

Things with Eileen were going great once again. Even more, Dalton managed to snag a spot on the dean's list despite his low GPA. Him and Eileen began discussing their future, agreeing that they would eventually marry. Until she suggested "why wait?" It felt right, so Dalton proposed soon after. The pair was now engaged.

After graduation, Dalton and Eileen got an apartment in Belladonna Cove. Their friends Melissa and Scott showed up with some surprising news: they had been dating for awhile, but kept it secret after Dalton proposed so they wouldn't steal his thunder. The pair got engaged shortly after, and Dalton agreed to let Melissa move in while she was planning her wedding. They also needed a roommate, as Dalton and Eileen were struggling to find work. But the Tinsley residence became a busy place as they were hurrying to put the finishing touches on 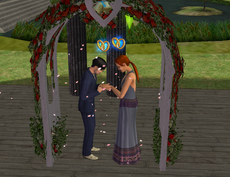 their fast approaching wedding, forgoing a long engagement. They kept the ceremony very small, opting to have the reception at their apartment complex. The two married with Dalton taking her name. They embarked on their honeymoon to a hidden campsite in Three Lakes - the same one where they had first professed their love for each other three years prior.

Upon their return, Dalton took a job as a barista at the local coffee shop. Melissa later moved out after marrying Scott and Dalton soon took a job in sales. Now with some money saved up, the two took a vacation to Takemizu Village for their anniversary the following year. The couple later adopted a cat, who they named Heidi. 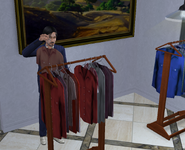 Another photo from Dalton and Eileen's wedding

Dalton and Eileen after cutting the cake
Add an image to this gallery
Retrieved from "https://sims.fandom.com/wiki/Fanon:Dalton_Tinsley?oldid=903990"
Community content is available under CC-BY-SA unless otherwise noted.