Crystal was created by Starmoonie and is featured in the fanon, The fall of Twinbrook.

Zola grew tired of living alone and wanted some company to talk to. Crystal was only created with only two life fruits, a heart shaped gem, and a very small amount of scrap, Zola wanted to create a daughter not a robotic monster like Bot21 who served others rather than living his own life.

Crystal was born on a morning like no other, she was the second born because Zola messed up with ingredients creating her. Instead Otis was born and he seemed to be the dominant SimBot in the house even as his competition, Daniel, arrived. Crystal was the typical shy simbot who wanted gain friends and find love but Zola did not allow romance because her experience with romance.

So she made friends with her mother's enemy, Bot21. Bot21 knew Crystal was just created but felt he can be her friend and make her feel welcome in this world like his father welcomed him. Crystal became close to Bot21 and learned of Nova's plan of Dominance in the world and her mother's plan for revenge. She her relationship with her mother was shattered and from then on she became a bit evil in trying to sabotage Nova's plot for evil. 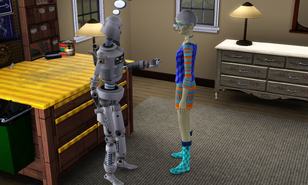 Crystal is born! Muahahahahaha!
Add an image to this gallery

Retrieved from "https://sims.fandom.com/wiki/Fanon:Crystal?oldid=625152"
Community content is available under CC-BY-SA unless otherwise noted.